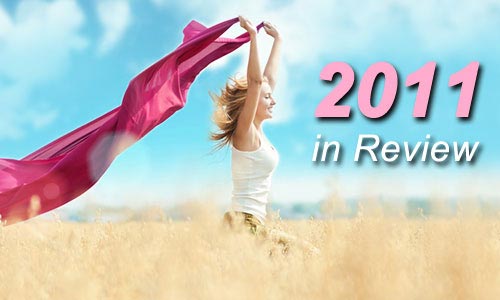 But first off, here’s my annual review for the year. Because so many things have happened in my life this year, I’m going to do a quick recap by way of a timeline first. This will be followed by a list of 2011 accomplishments I’m most proud of. After which I’ll share my top lessons learned this year, before I end off with my plans for the big year of 2012 ahead.

If you’ve been following my blog and Facebook closely, the stuff below wouldn’t be news to you. Here is a summary of what I’ve been up to this year:

(in no specific order)

(Note #1: Am speeding up this post because I’m at Starbucks now (8:23pm) and they’re closing in 30 minutes, since it’s New Year’s Eve. Bummer! It’s okay – my laptop battery is dying soon, and I should be heading to my friend’s countdown party right about now anyway.)

(Note #2: I’ve written about the benefits of choosing a focus area for the year before. What I’m going to share below is my focus area for upcoming 2012. I recommend you to do the same too – read: Which Area Of Your Life Do You Want To Transform This Year?)

In the past 3 years, PE has evolved into a huge community – it is now the #1 community for people who are passionate about achieving excellence in life. From starting as a small blog on Dec 14 ’08, it is now more than just a blog – it is now an online platform for growth, where people can access nearly 400 high quality articles on growth, take part in organized monthly challenges and take action on personal goals, connected with like-minded people around the world via the forums, download free growth resources such as ebooks, wallpapers and manifestos, watch original videos on relevant growth topics, among many others.

This is why I renamed PE a couple months ago from The Personal Excellence Blog (TPEB) to just Personal Excellence (PE), because we are no longer just a blog. (Note that we are just known as PE today and NOT PEB nor TPEB, which some of you are still referring by. I’ve permanently dropped the words ‘the’ and ‘blog’ from our official site name since October. Read: Announcing… All-New Personal Excellence [dot] Co!)

I’m very excited about 2012, because I have a lot of big plans and intentions for the next year (and years ahead). Moving forward, I intend to expand PE bigger than what it is today. The restructuring of the site in Oct this year to incorporate a whole new Challenges section, plus videos and manifestos section, plus the launch of the new domain PersonalExcellence.co earlier in Oct (and subsequent removal of CelestineChua.com – fellow bloggers who are still linking to the old domain on your blogs, please update your links!), are just the first of many new things to come. Some of my future plans include having a talkshow (at some point), releasing my first published book, expanding the reach of PE to 5, 10, 20, 100, 1000 times its current reach, among many others.

But most important of all, 2012 is going to be the first year where I’m not going to set any concrete goals. That’s right. As opposed to my previous approaches, this coming new year, I’m going to have a full-fledged experiment in living. For the first time in my life, I’m going to totally let myself be guided by my intuition. I’m going to lead every day of my life in the year based on what my heart guides me to do, and I’ll follow it as best as I can. And I’m going to see where it takes me from there.

This is not an experiment in laziness. For those who are lazy to work, please do not use this as an excuse not to set goals, because you know you’re just using this as a cop-out reason to skive. This is also not to jab the ideas I share on the site, because:

By not setting goals, what I’m referring to is not setting myself with a specific list of things to do by X date, and not living my life on pre-intended schedule of having to do X things in X week or X month. I’m referring to waking up every day, with the absolute full intention to live my life to the fullest, to do whatever is necessary to excel and to accomplish as many things as I can with my life, and living my life based on that intention.

I already have a broad level direction of things I want to achieve/do in the future (as I shared above, with the talkshow plans etc), and I already know they will come to fruition as long as I take the necessary steps. Just that instead of using the same approach as I’ve done in the past (i.e. the logical, set X goal, do step A, step B, step C, all the way to step Z route), this time I’m going to simply follow my intuition and see how it’s going to guide me there.

In a way it’s like letting go of the steering wheel in my life (which I’ve been holding pretty tightly on in the past), holding it gently, continuing to maneuver the car in the background using my knowledge of driving (i.e. goal setting), putting faith in the universe, and seeing where it’s going to take me. It’s going to be quite interesting, to say the least.

In all honesty, I’ve sort of been doing this, where my travels are concerned, since I started traveling June. I started off my trip with little idea of what I’m going to do in the next 1-2 months, and simply allowed the trip to create itself from there. And hence created an almost 7-month long adventure of a ride so far, bringing me from Holland, to Germany, to France, to London, to Cambridge, to Spain, to Philadelphia, to Washington DC, to Boston, to NYC. 😀 Today, I’m traveling with little to no idea what I’m even going to do next week, and I’m really just going with the flow here and letting things manifest themselves. And boy has it been an amazing ride.

Starting first Jan (tomorrow), I’m going to start living my year of 2012 on my intuition. If there’s any one big goal I want to accomplish in 2012, it’s to develop my intuition and be connected with it on full throttle (refer to #3 and #5 on my reflections for 2011 above). Making 2012 my year of intuition is definitely going to help in that.

(PS: Those who have not joined Live a Healthier Life in 21 Days Jan 2012 challenge, be sure to do so now! Signing up is completely free and you have less than 24 hours to sign up!)

My Birth Story: Birth of Baby A!

Going to Glasgow, Scotland! (Anyone Here From Scotland?)