How To Say No 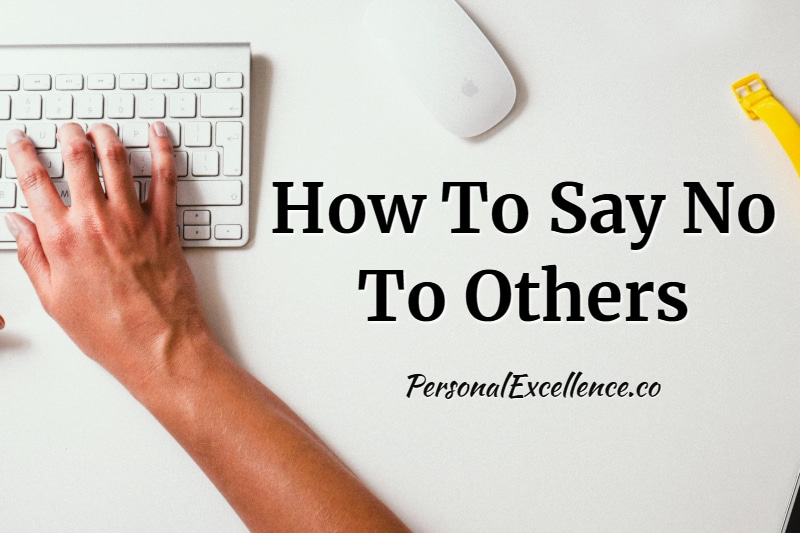 Do you have problems saying no?

Hence I would say yes whenever I could, and no as infrequently as possible.

While saying yes might seem like an easy way out of the conundrum above, in reality it was a terrible solution.

Because while it provided quick short-term relief — avoiding confrontation with others and dealing with uncomfortable emotions — saying yes has its own long-term implications. Because every time we say yes to something, we say no to our own priorities. Consider the following:

So when I first started my business, I said yes to almost everything. Meetups, networking sessions, pick-my-brain sessions, favors, collaborations, blog interviews, media interviews, workshops — it was a yes, yes, yes all the way.

This worked well for the first few years. But as my business grew, as I became more known in my field, I found myself with more requests, invitations, and demands than I could humanly fulfill. I also regularly received requests for things I didn’t really care about, from people who were proactive in getting my time, which then constantly moved their requests to the top of my list.

Suddenly, my days became filled with what others wanted from me. I found myself busy meeting people and satisfying their curiosity about what I do, but not nudging forward in the things on my list. I found myself busy doing interviews, answering emails for help, collaborating with others as a favor, agreeing to sessions to pick my brain, and doling out free advice to people’s problems, with no time for my own projects.

Soon, I became burnt out. My time was no longer my own — it was taken over by what others wanted from me. I was unhappy, miserable, and deeply drained. This was when I realized the importance of saying no.

Why Saying No is Important

In an ideal world, we want to say yes to everyone. But saying “yes” just to avoid conflict or disagreement isn’t the way to go. Saying no is necessary to…

At the end of the day, every “yes” comes with its costs — your time, energy, happiness, goals. While the cost may be small for each “yes,” little trickles of wrong yes’es over long will deviate you from where you want to be.

To push away all these costs, these deviations, you need to say no — so that you can say yes to what you want.

For the requests you want to reject, it’s much better to turn down the person right away rather than to put it off. The longer you stall, the more complicated it becomes, because now you have the added pressure of explaining why you took so long to reply. Just be direct and get to the point.

Whenever I find it hard to reject someone, I have a 2-sentence rule to get it over and done with. Start off with a “Sorry, I can’t.” Then, give your reason in one sentence. (Or if you don’t want to give a reason, just end it there.) Limiting your rejection to 2 sentences makes the rejection easier, because rather than give some lengthy explanation about why you can’t do something, which makes you procrastinate rejecting the person, you cut right to the chase. Even if you end up replying in 3-4 sentences or more, the 2-sentence rule helps you get started.

Often times we are worried that if we say “no,” we’ll burn bridges. So we hum and haw and say yes. Or we relent and say yes when the person persists.

Here’s the thing — most people will accept your no when you are sincere in it. No lies, no gimmicks. Just plain raw honesty. E.g. “I’m not free to meet from now to June as I’m busy with [X]”, or “This isn’t a fit with what I wish to do right now, sorry.”

In my podcast episode on How To Say No, I shared that I was once invited to be on a board of advisors, by someone of certain level of importance. While I wanted to reject it, I didn’t feel that I had a justifiable reason to do so. It wasn’t because I had some other important engagement — I simply wanted to focus on my own work. After worrying about this for a few days, and editing and reediting my email reply, I decided to be honest and say the truth: that being involved in this would take time away from my own projects, and I didn’t want to be involved in it if I couldn’t give my 100%. Then I clicked “Send.”

As it turned out, he responded within a day, telling me that he had read my email with a smile, and that it was perfectly okay and not to worry about it at all!

Many times, our worries about others are unfounded. Focus on being sincere in your response, without lying or giving excuses. If the other person is understanding, they will understand it. If not, they may have mismatched expectations of you in the first place, and it’s best not to burden yourself with such expectations (see #6).

3. Focus on the request, not the person

One of the reasons I struggled with saying no in the past was that I didn’t want to reject the person. My mom wasn’t there for me when I was a child (in that she was emotionally vacant as a person), and that made me want to be there for others. However, as I shared above, saying yes to everyone made me burn out. I was utterly drained and miserable.

In learning to say no, I learned to focus on the request and not the person. Meaning, instead of feeling obligated to say yes because I was afraid to let the person down, I learned to look at the request and assess if it is a fit with my plans. Is this something I can realistically do? Is this something I can afford to do right now? In light of all the things on my to-do list, can I do this without compromising on my other to-dos?

If the answer is a “no,” then I’ll reject it. It’s not about the person. It’s nothing personal. It’s simply about the request itself, and the request simply isn’t something I can fulfill at the moment. When you review requests as they are, you objectively reject requests that are incompatible with you, versus forcing yourself to say yes just to make people happy.

We’ve been taught to associate no with negativity, and that saying no will lead to conflict. But it is possible to say “no” and maintain a harmonious relationship. It’s about how you do it.

To start off, stop associating “no” with negativity. Realize that it’s part and parcel of human communication. When you see “no” as a bad thing, this negative energy will inadvertently be expressed in your response. There’s no need to feel bad, guilty, or worry about the other person’s feelings (excessively). This doesn’t mean that you should be tactless in your reply, but that you should not obsess over how others will feel.

Next, when saying “no,” explain your position calmly. Let the person know that you appreciate his/her invite/request but you can’t take it on due to [X]. Perhaps you have conflicting priorities, or you have something on, or you simply have no time. You would love to help or get involved if possible, but it’s not something you can afford to do now.

Even though you are rejecting the person’s request, keep the options open for the future. Let the person know that you can always reconnect down the road to meet, collaborate, discuss possibilities, etc.

This is optional, but if you know of an alternative, share it. For example, if you know of someone who can help him/her, then share the contact (with the person’s permission of course). This should only be done if you happen to know an alternative, not to compensate for not saying yes. You are not responsible for finding alternatives for the other person.

6. Don’t make yourself responsible for others’ feelings

Another huge reason why I resisted saying no in the past was that I didn’t want to make others feel bad. I felt responsible for how others would feel, and I didn’t want others to be unhappy.

The result was that I would bend over backwards just to make others happy. I spent countless late nights catching up on work as I put others’ needs before myself and only had time for my own stuff at night. This was terrible for my health and well-being.

At some point, we need to draw a line between helping others and helping ourselves. To be of service to others, we need to protect our health and happiness. Don’t make yourself responsible for others’ feelings, especially if they tend to respond negatively to your “no’s,” expect that you should be there for them (when you have no obligation to each other), and don’t seem to take no for an answer. If the person accepts your “no,” great; if not, then too bad. Do what you can, then move on if it’s beyond what you can offer… which leads me to point #7.

If the person is disrespectful of your needs and expects that you should always say yes, then you might want to re-evaluate the relationship.

Too often we are taught to maintain harmony at all costs, which is why we dislike saying no — we don’t want to create conflict. This is really true of my culture, where people say yes even though they disagree with something, only to harbor resentment and complain about it later on.

But when a relationship is draining you, you have to ask yourself if this connection is what you want. In a healthy relationship, both parties support each other. It’s not one where one party is constantly giving and giving while the other person keeps asking and taking.

When I evaluate the relationships that drain me, they are the ones where I’m not my real self, where I’m expected to say yes and the other party is unhappy if I say no. For such relationships, the other person is unhappy as long as there’s a “no” — it doesn’t matter how the “no” is said as the person simply expects a “yes.”

If you’re dealing with such a person, the question to you is, is this relationship worth keeping?

So instead of worrying about saying no to someone who cannot accept the “no,” which isn’t the real problem, you address the root issue — that you’re in a connection where you’re expected to be a giver. In the process of doing so, you remove relationships that are toxic and unhealthy. Perhaps in the process of doing this, you strengthen your relationship with him/her. Because now you can be openly honest with him/her and say yes or no as you desire, without feeling guilt, fear, or hesitation — which is what saying no should be about.

Check out as well:

What To Do When You Feel Uninspired

How To Be More Accepting of Others

6 Common Misconceptions of The 80/20 Rule