Two days ago, I gave free hugs at the busiest area of Singapore during the lunch hour–the Central Business District @ Raffles Place! 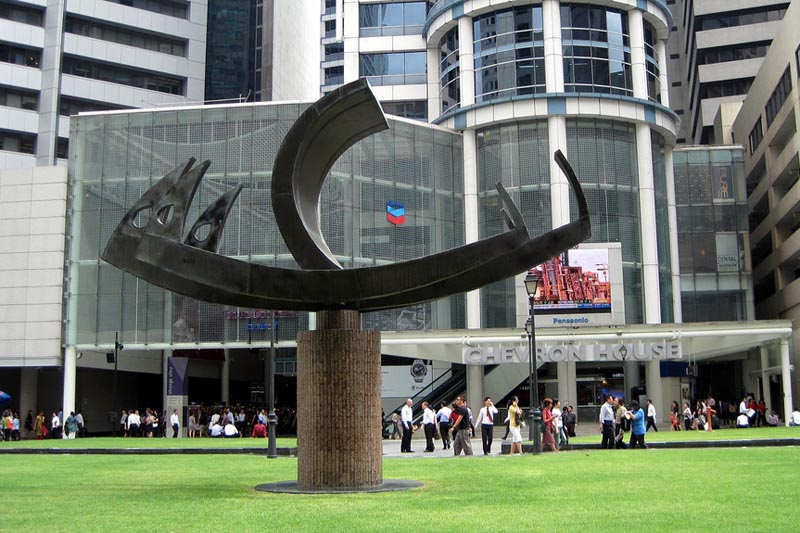 This task is as part of my feature on Soul Sisters, a upcoming documentary by MediaCorp on inspiring women walking unconventional paths. MediaCorp selected me to be on the show as they feel I have an inspiring story to share. I am personally excited to be part of the show. :D

In filming my episode, the director Lee asked me if I was okay with giving free hugs to strangers, given that one of my tasks for my 21-day kindness challenge last November was to hug someone. Of course, her request to hug strangers is totally different than what I had assigned to you guys since my task was simply to hug someone you already know. But not being one to back down from a challenge, I said to her, “YES!”

The challenge I set for myself was to hug as many people as I could, in a way that was authentic and true to me (i.e. no lying, giving false compliments, projection of a false persona, begging, etc. just to get a hug). I opened myself to hugging anyone, regardless of age, gender, race, or attire. Young or old; male or female; Chinese/Indian/Caucasian/Malay/Filipino/etc.; corporate or non-corporate attire–these people were all part of my target. 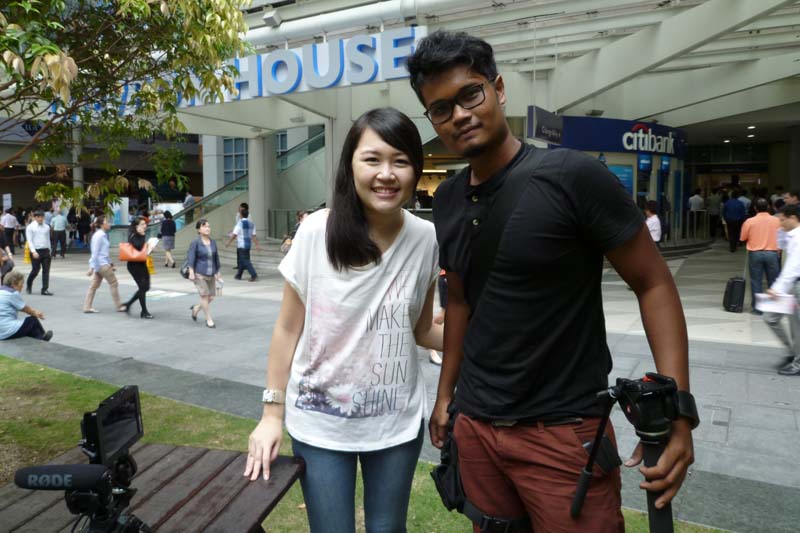 Me and Sha, the camera guy. He’s 24 and passionate about videography. Nice chap with a good attitude–I like his character! :) 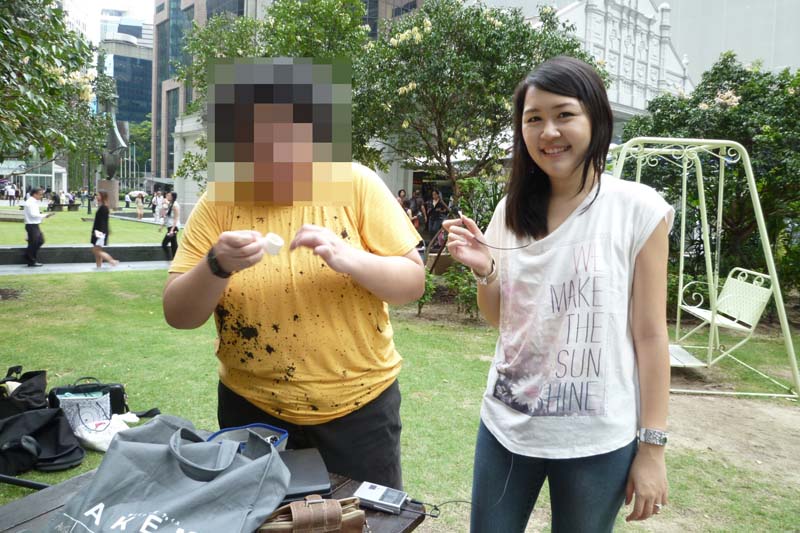 The director Lee and I. She doesn’t like having her pictures seen anywhere on WWW, so I told her I will mosaic her face. :) 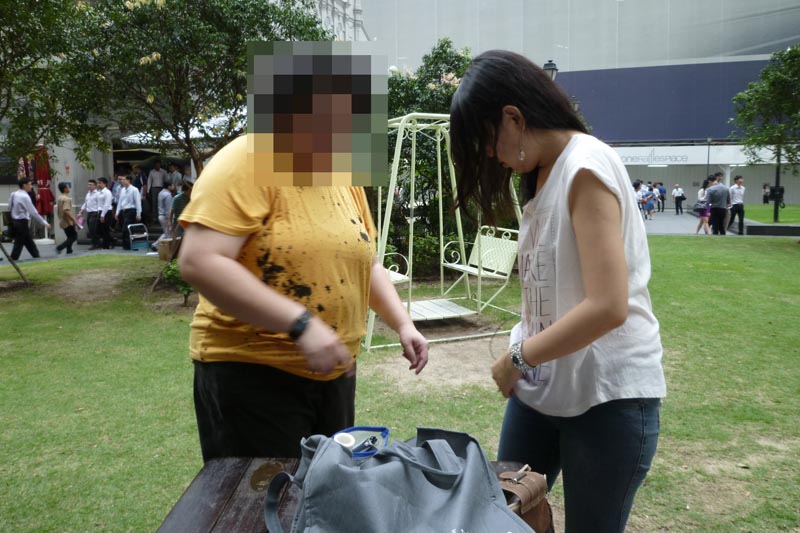 Getting wired up! (Got to record my voice and the strangers’ reactions when I approach them!) 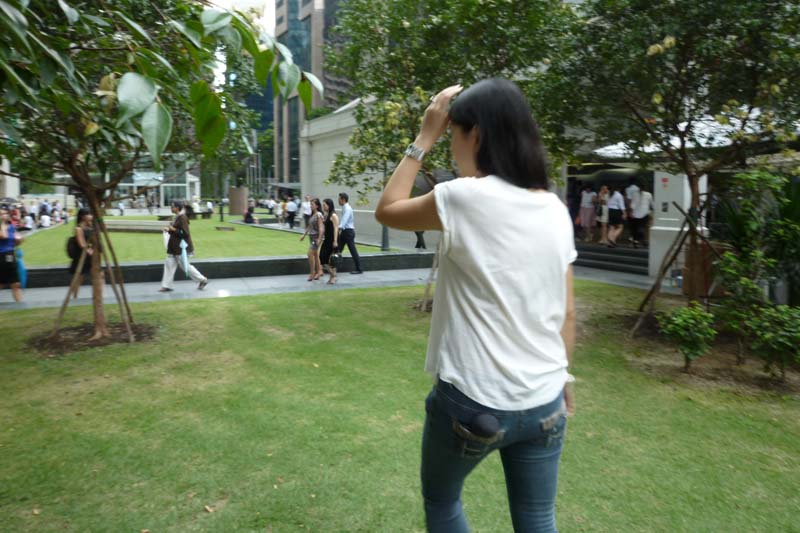 All set and walking to the battle field! :)

Commencement of the Challenge!

In order to get my hug from others in a non-cheesy and non-intrusive manner, I created an opening pitch, “Hi, I’m doing a hugging challenge now and I’m supposed to get a hug from a stranger. Can I get a hug from you / Can I give you a hug?”

Initially I started with “Hi my name is Celes” but I promptly dropped it after a few tries because the lunch crowd at Raffles Place proved to have infinitesimal attention spans. I learned that if I was going to get/give my hug, I needed to get my message across fast, in like the first 2 seconds.

It is definitely not easy walking up to any random stranger to ask him/her to give you a hug–especially not in a lunch crowd at the Central Business District, where everyone is walking at lightning speed, trying to get from Point A to Point B, with a highly pissed-off look on his/her face!!

What made the challenge more difficult was when people rejected me left right and center, some of whom were extremely rude in their rejections.

For example, there was this stiff-looking, Caucasian guy who breezed past me with a straight face and a monotonous voice saying, “Very busy. No. Don’t talk to me.” This was even after he heard everything I had to say and knew I was just asking for a hug.

There was an Indonesian lady who was extremely rude and gestured wildly for me to go away the whole time when I was just speaking amiably to her. She kept saying loudly, “NO! NO! NO! GO AWAY! Just GO AWAY!” even after her own friend had acceded to my request and had given me a hug!

There were also nonchalant, jaded-looking Singaporeans who either walked straight past or were very dismissive even after I had explained what I was trying to do. It was disappointing to see  Singaporeans react so unkindly; I was expecting more from my fellow citizens. I always think the simplest thing one can do to another fellow human is to at least acknowledge the person and give a polite “No it’s okay” or “No thank you” even if one is not interested in what the other had to say; this is something I do myself when dealing with people giving flyers or sales promoters on the street. 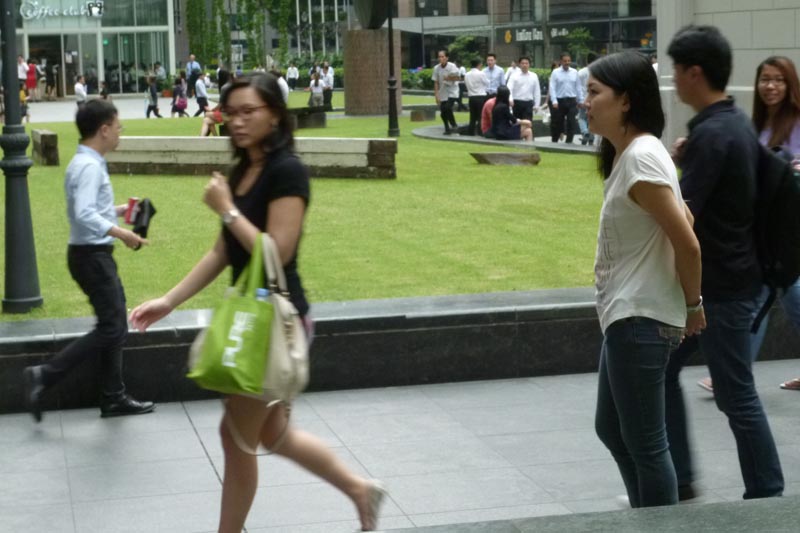 Looking for people to hug. Everyone looked really lean, mean, and unhappy. 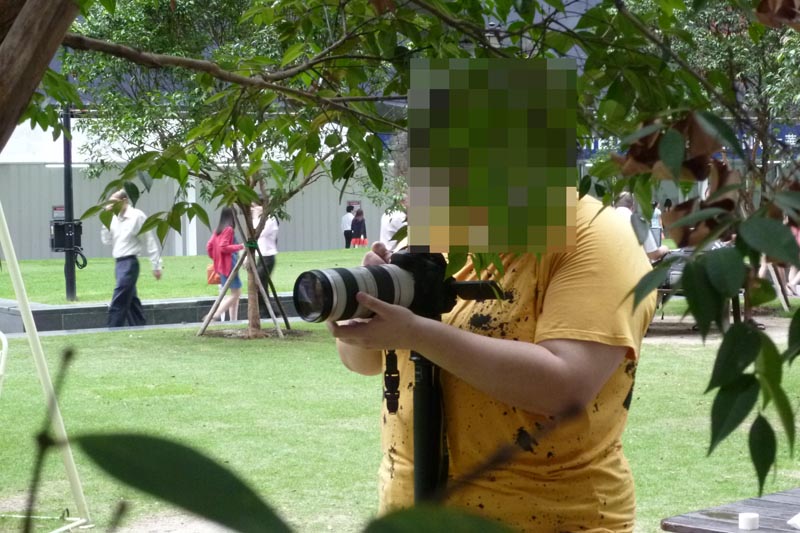 Lee filming me in stealth mode, so that the passer-bys wouldn’t be alarmed by cameras following me. Sha was also filming me from a different spot. 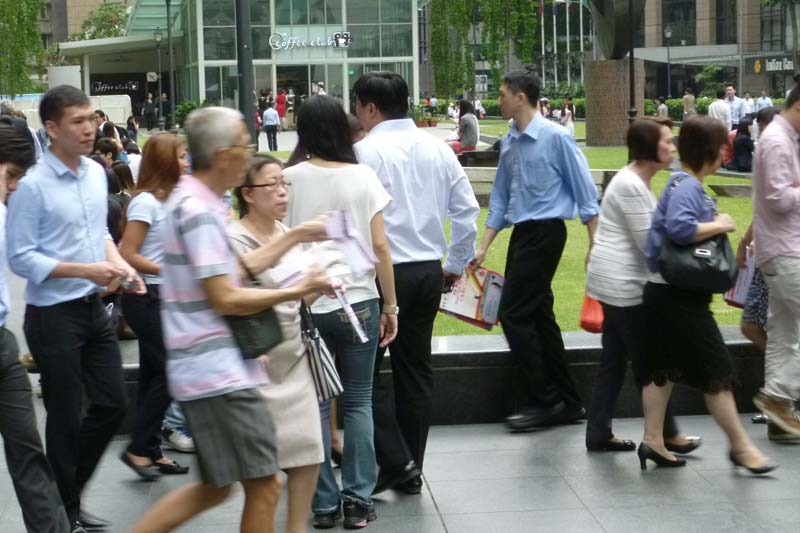 Trying to get someone’s attention in the middle of the busy lunch crowd, to no avail. No!!! :( 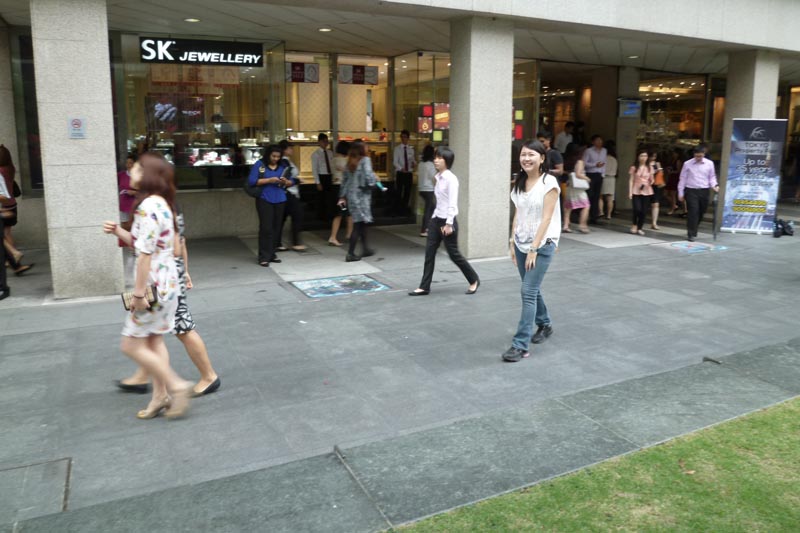 There was one really sweet, beautiful Singaporean girl in her early 20s who promptly went, “Yes, sure, of course!!!!” and gave me a HUGE hug after hearing my pitch. She was sitting alone when I approached her.

Ten minutes later, I saw her walking past me with someone, presumably her friend. I promptly approached her to say hi, while at the same time requesting a hug from her friend. While her friend threw me a bizarre look and shrunk back in fear, the sweet girl nudged her on, saying, “Go hug her! Free hugs!! She’s giving free hugs!!” Her friend then eased up, after which I stepped forward to give my hug. I also got them to hug each other after that. :D It was such a sweet moment!

There was also this group of five individuals (Singaporeans as well) who were sitting down and chatting among themselves. After I approached them, one of the guys responded very enthusiastically and said, “Oh, sure, why not?” He then gave me a hug, which opened the window for his four friends to do the same. At the end, we did a group hug and bid each other good bye! :D 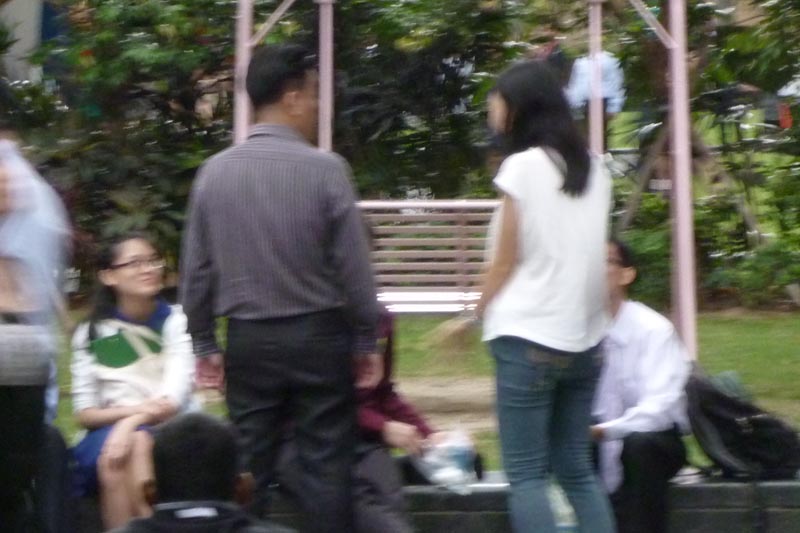 Approaching for a hug while the rest watched in curiosity 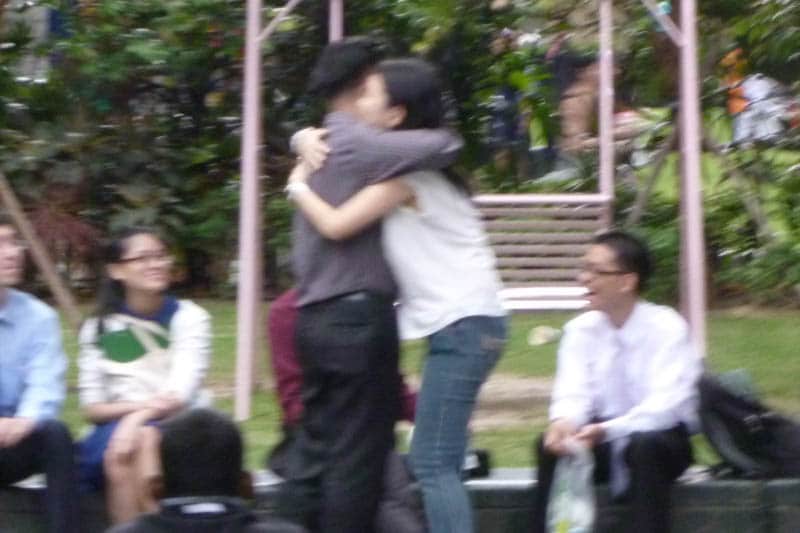 Yes — getting my free hug! 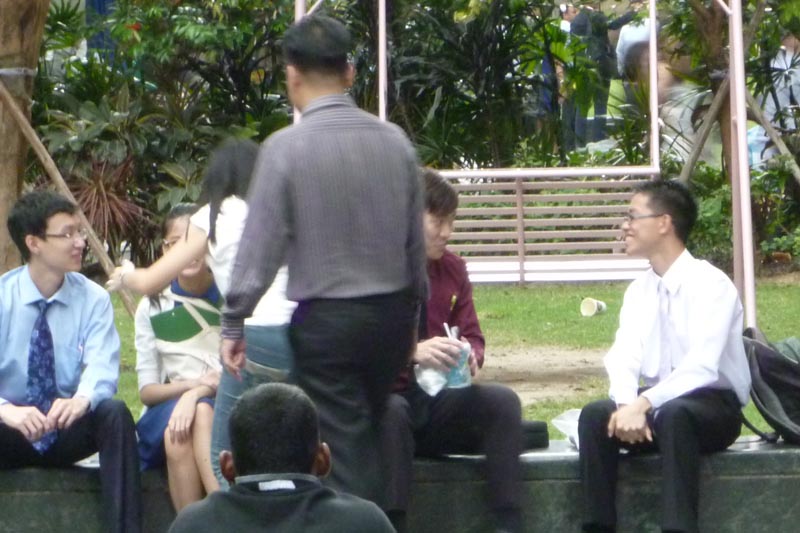 Moving in to hug the rest 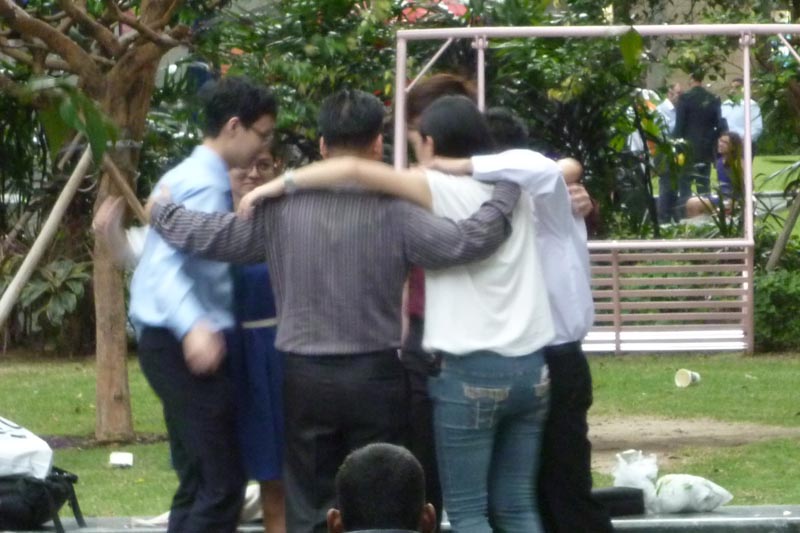 Huddling for a group hug!

The walking crowd was also among my target. I approached anyone I saw–be it lone individuals, duos, or trios. I was pleasantly surprised that many people were receptive to my hugging invitation and gamely gave me a hug even though they might have been shocked initially. :) 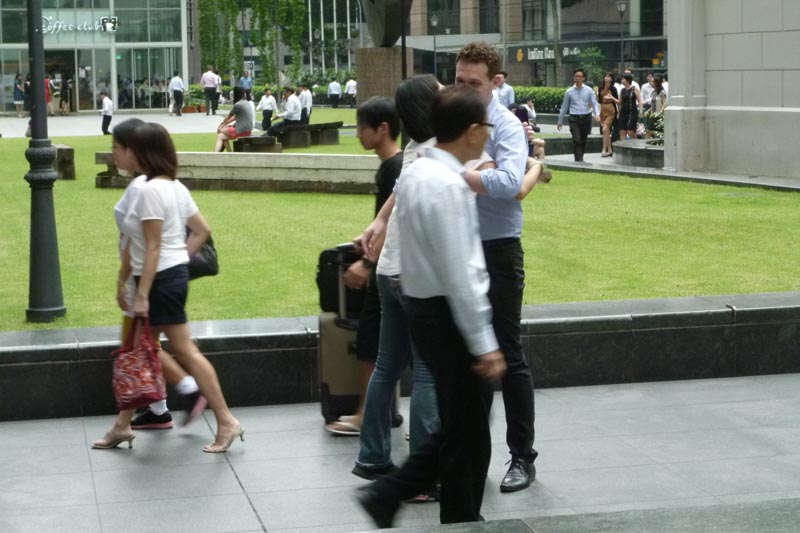 One of the lone individuals I approached for a hug. This one was a Caucasian guy. While he was surprised by my request initially, he immediately warmed up and said, “Sure, okay!” and gave me an open hug. :) 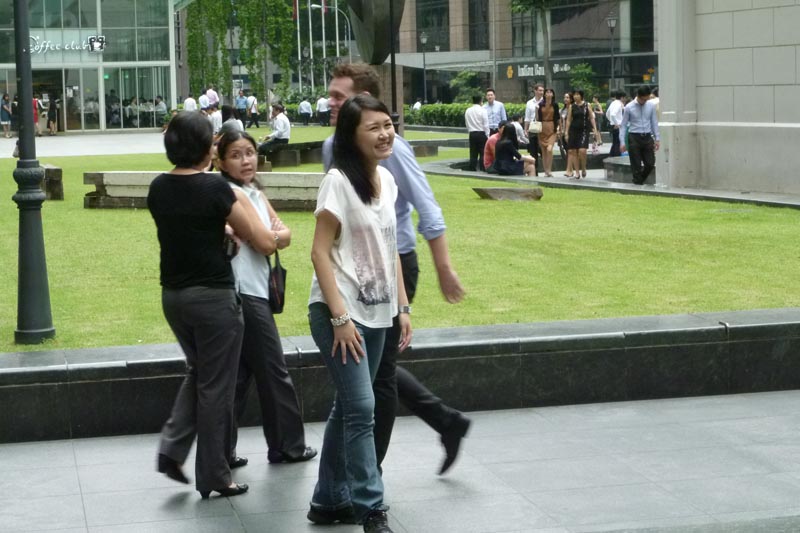 Smiling sheepishly after the hug. I didn’t notice it then but it seems from the picture that he was smiling after the hug too! That’s quite sweet to know the hug left a smile on his face! :) 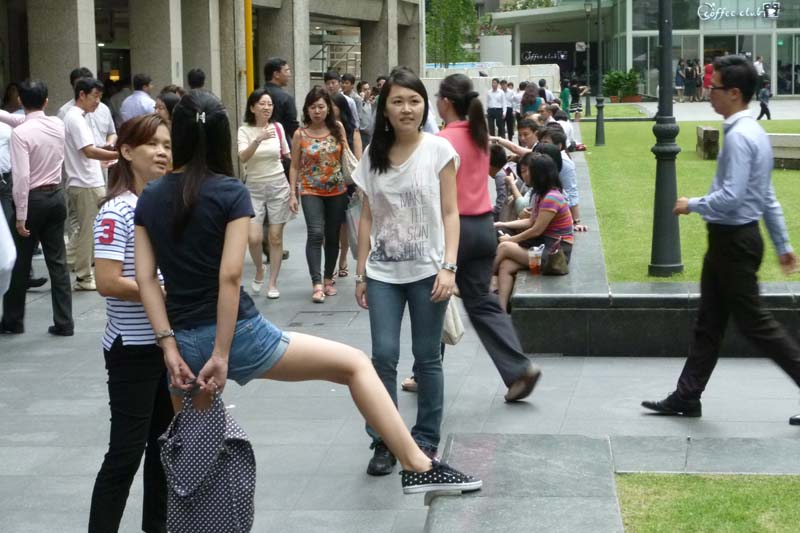 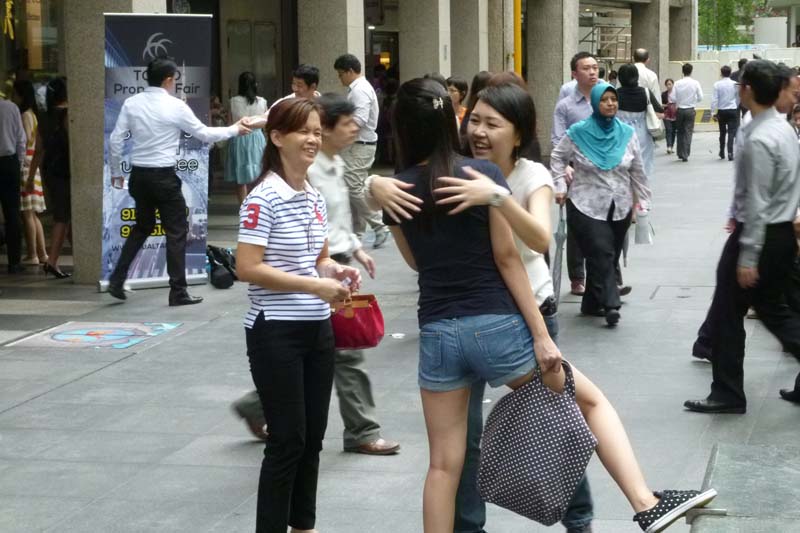 Then I had this funny experience with this trio of Malay ladies. While they were quite stoic and pushed me away with a firm, “No,” initially, I kept following them and saying, “Please! Just one hug!!!!”

After trialing them for about thirty seconds or so, they finally opened up and gave me a hug. ;) 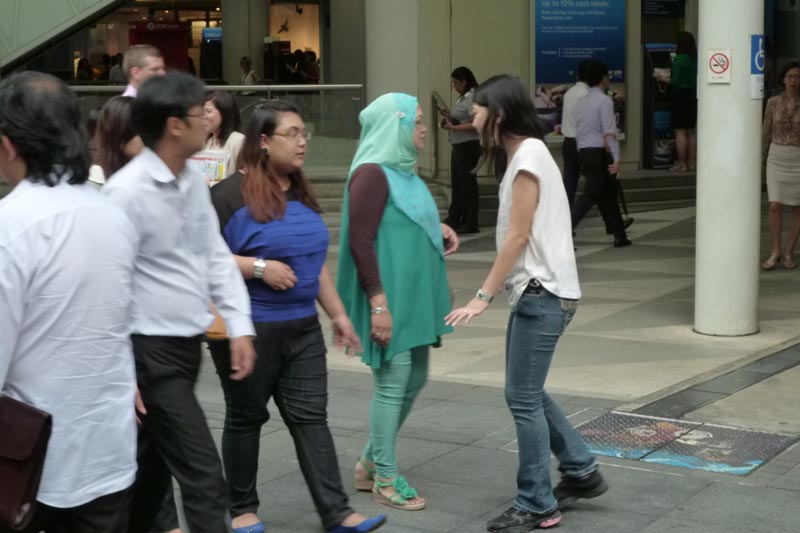 Approaching a trio of Malay ladies for a hug 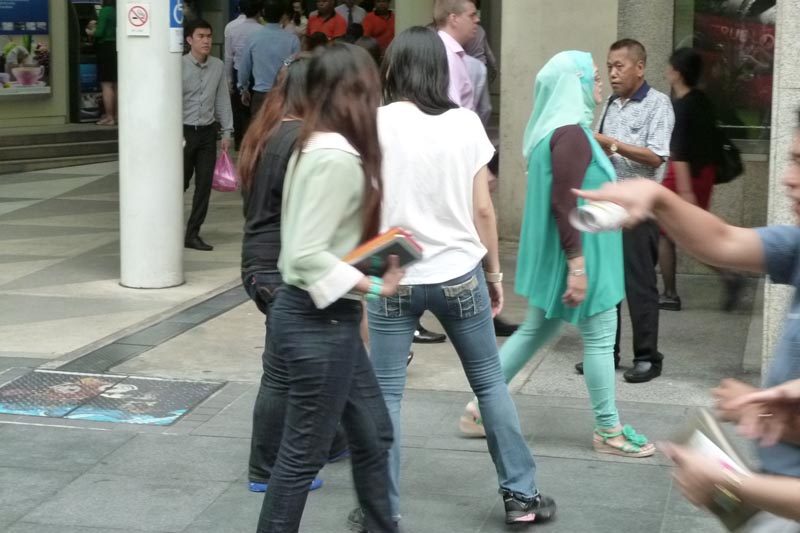 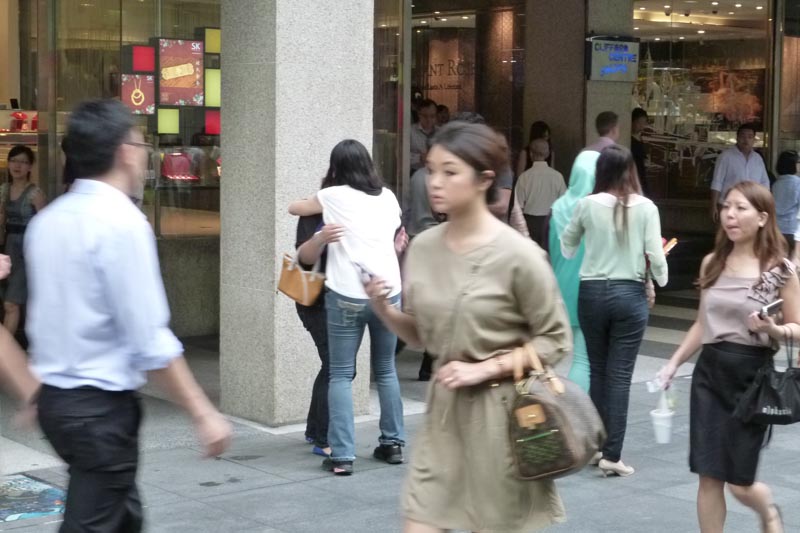 Finally getting my hug from one of the ladies! I continued to follow the other two and subsequently got my hug from them as well. :D

More Pictures of Me Hugging Others

Here are more pictures of me giving my pitch and successfully securing a hug from other passer-bys. :D 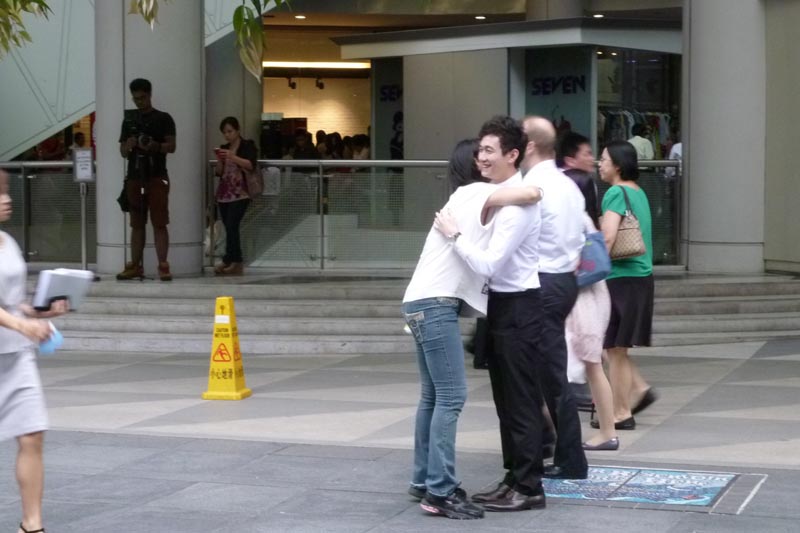 A nice gentleman who gamely took up my request and gave me a hug. I think his name was Marcus or Lucas if I’m not wrong! Very sweet guy! 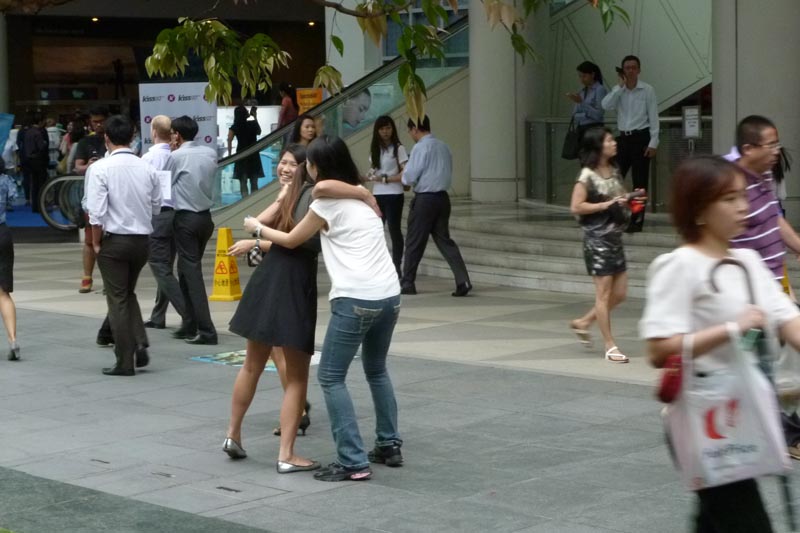 Hugging two sweet ladies! They were initially all ready to ignore me and walk past me. But after hearing my pitch, one of the girls relented, and the other also opened up and allowed me to give her a hug! :D 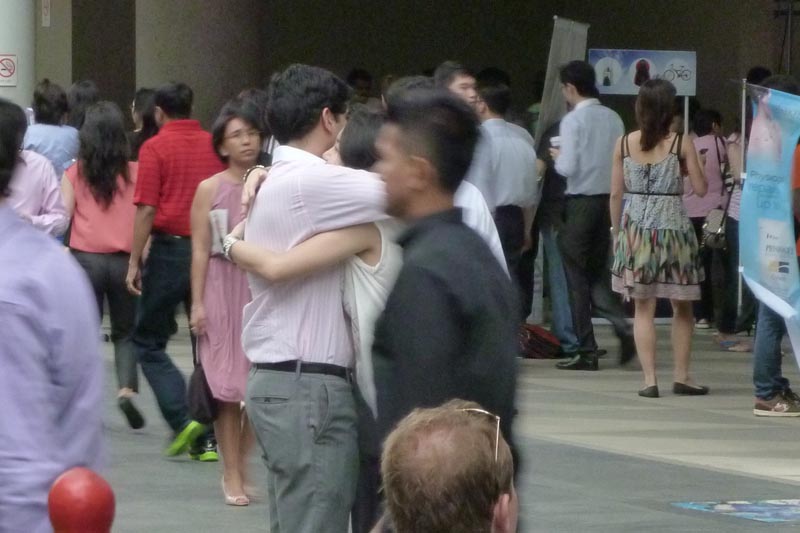 Hugging a duo of Indian guys who were standing outside Chevron House, probably waiting for their friends. Again, very sweet and nice people! They did not react with fear but instead were very warm. 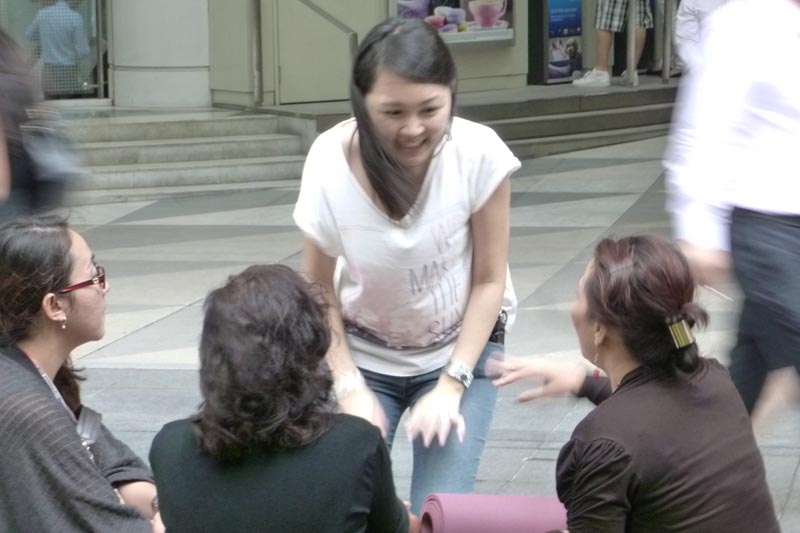 Approaching a trio of Indonesian ladies to get a hug 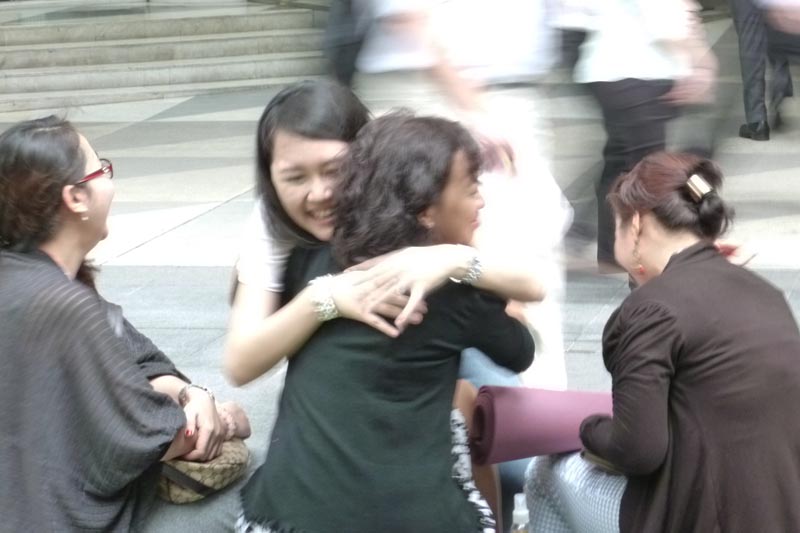 Getting a hug from the lady in the middle! The other two outright rejected me! The (Indonesian) lady on the right of the picture was particularly rude unfortunately. She kept flapping her hands at me, saying, “NO! NO! NO!” and gesturing me to get lost. 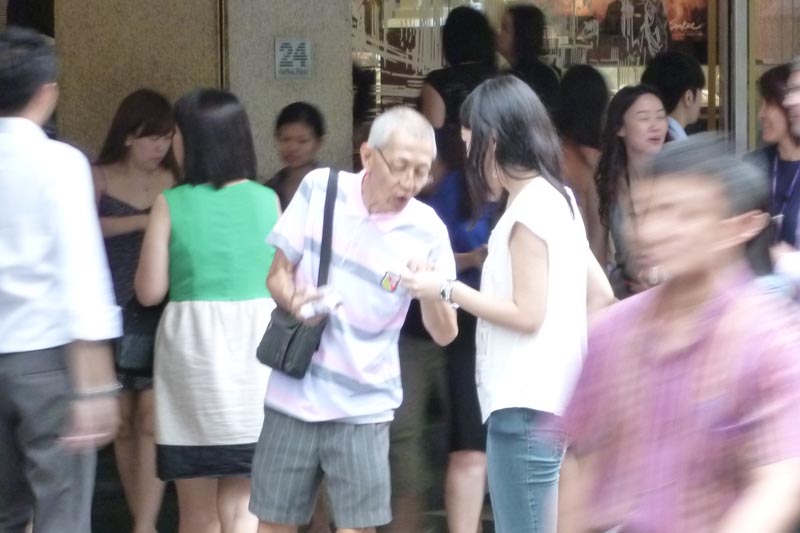 Nice uncle Paul. :) He was distributing flyers for wedding-prep beauty treatments and gave me one. I then asked him for a hug and he said okay. :) 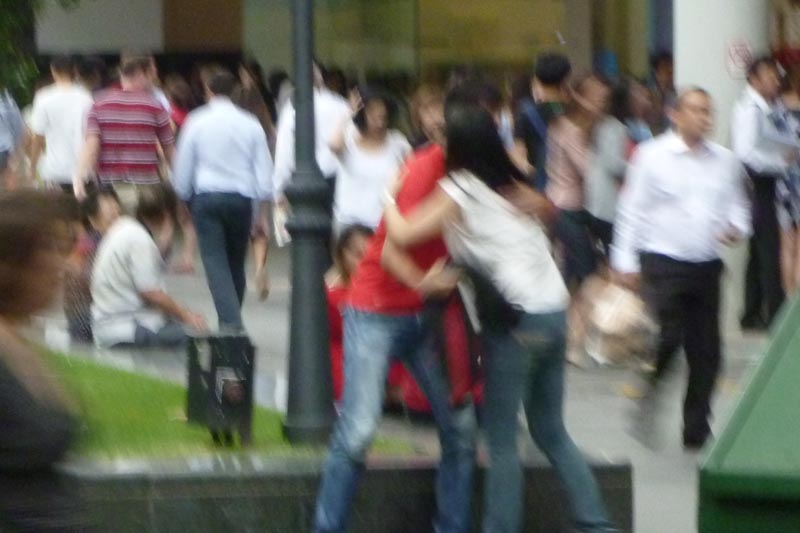 Approached this guy who was sitting by himself and fiddling with his phone. He was shy yet friendly and gave me a hug in the end! 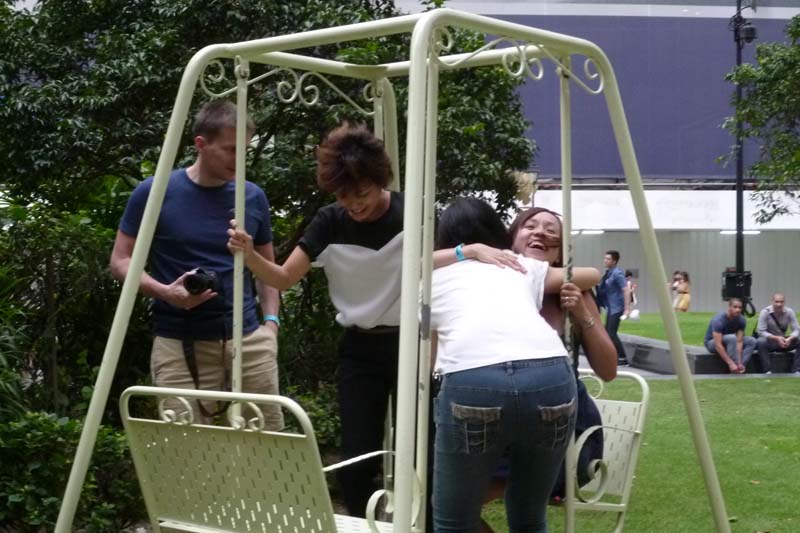 I “attacked” people at the swing as well! This trio (Australians, I believe) gave me a hug with open arms and we even took a picture together after that with their camera! :)

The challenge lasted for about 45 minutes, after which we wrapped up the scene. All in all, I hugged 25-30 individuals and received 8-9 rejections.

It was a fun experience in that I got to meet all these different people and experience their reactions. Some people reacted very adversely to my simple, benign request for a hug. Some people resisted initially but warmed up after hearing what I had to say. A small handful were very enthusiastic and promptly said, “Sure, why not???”

I am personally excited by those who reciprocated my intent and gave me a hug. Seeing them initially greet me with a puzzled/resistant look, which slowly turned into a smile when they heard my pitch, and them subsequently opening their arms up to hug–that was so sweet and endearing. I hope they were left with a warm tingling feel after the hug and this small little experience planted a seed of love (however small) in their hearts. I know it did to me. :D

I’m glad that I took up this challenge in the end. While hugging a stranger is not part of my routine nor something I overtly talk about on PE, it’s an action in line with the principles that I preach–oneness and love. Stepping out of our comfort zone is also something which I advocate as it’s part and parcel of growth, and approaching strangers for hugs was definitely out of my comfort zone since I had not done it before.

At the end of the day, are you someone who constantly challenges yourself to move out of your comfort zone? Are you open to new opportunities and connections or do you always shut them off without thinking? Some questions to think about as you walk away from this post.

Will let you guys know when my episode comes up; it’s currently slated for Oct 1. :) This series is currently planned for Toggle, MediaCorp’s new online video platform, and it may also be broadcast on Channel 5 if everything goes well. :D I may be doing a behind-the-scenes post for the whole filming (this hugging thing is only one of the other shootings we did), so stay tuned!

Are you someone who will gamely say yes if a stranger asks you for a hug? Or will you turn the person away?

My 2012 in Review :) A Year of New Milestones, Creation of My Self-Identity, and New Beginnings

How I Used to be Camera Shy (Join Me in Dove’s Camera Confidence Workshop!)

I Want to Chat with YOU! [Audio Recording Now Available]