The Day I Became a Pickup Artist (End of Date Coaching)

This is part 5c and the last part of my review series on Lunch Actually, a lunch dating company in Asia, after trying out their service in 2012. Opinions expressed here are my own. 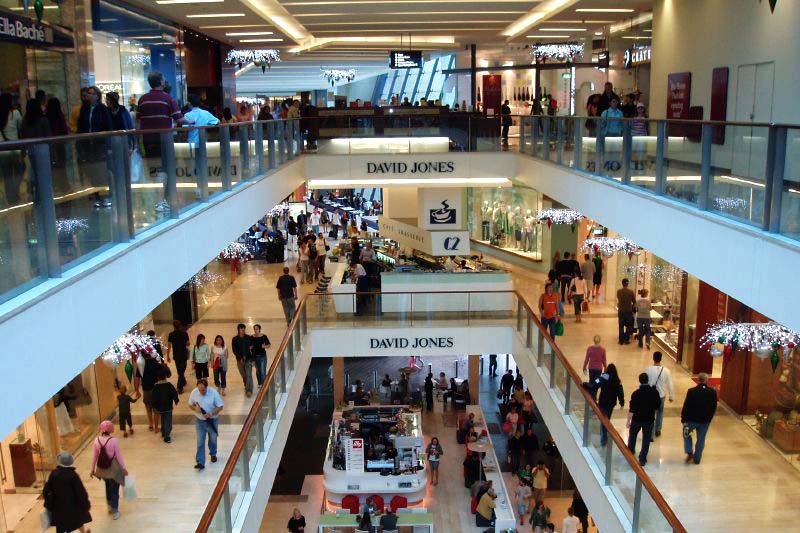 Last Tuesday, I took a break from my usual duties as a life coach and donned a role which I never thought I would take on in my life — a pickup artist. Well, for that one day anyway.

This was a challenge that my date coach, Kydon set for me — to approach and converse with random guys in a shopping mall. While I’m not unfamiliar with pick-up attempts, I had never tried to hit on guys before. The challenge started with me asking for simple directions, after which it got harder and harder, ultimately culminating into me asking for their number, and finally, to ask them to be my boyfriend. (Yes, I’m dead serious.)

While this was absolutely crazy, I focused on the plus side and thought it would be interesting to put aside my usual self, behave completely out of character for a day, and see what unfolds.

The challenge took place at Plaza Singapura Shopping Mall, next to Dhoby Ghaut MRT Station. I was there with three other ladies — Kydon’s clients who were asked to do the challenge as well. The pickup challenge lasted two hours. Some pickups were paired efforts while some were individual.

My ego was completely crushed at the end of the stint. Every stage went really well, including the part where I asked for the guys’ numbers… up until I asked them to be my boyfriend. This was where I received a mix of positive and violent (negative) reactions! By the end of the night, I had become a woman of no fear.

My Assigned Pickup Lines and Objectives

Here are the different legs of the challenge, in the order my date coach had assigned me. Each phase was executed on a different, unsuspecting male passerby in the mall. 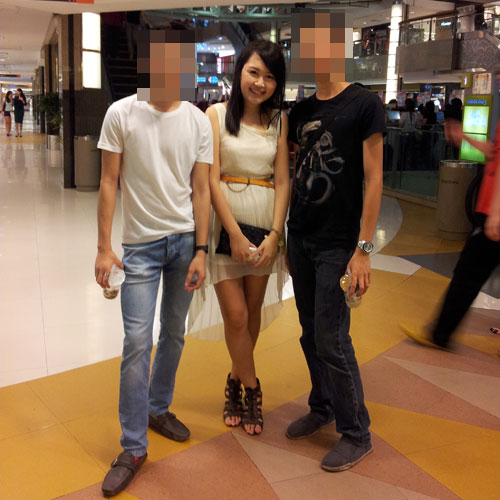 Two of the guys I chatted up on the day. Got a picture with them! 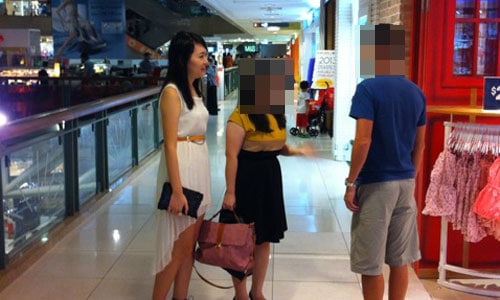 Talking to some clueless stranger. I believe we were asking him about movies here. 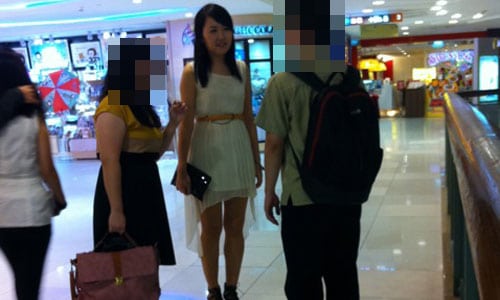 5 Lessons from My Day as a Pickup Artist

Kydon’s intention of this challenge was to get us to open ourselves up to do things outside of our comfort zone. After approaching about 15 men that evening, I picked up the following lessons for myself:

While I gamely did the above, it was largely because I was going through the date coaching and felt that I needed to follow through with the curriculum and what was asked of me, in order to experience the date coaching in its entirety.

It’s been a year, and thinking back, I wouldn’t have done this if given a choice again — because I did feel that it was disingenuous to approach people this way, asking false questions as a personal test — much less with very personal questions (e.g. the boyfriend question). These people were also not willing participants and were not in onto the challenge, so this kind of felt like it was against my personal values and ethos.

I also did not feel that the challenge really mirrored the kind of insights and growth needed in a true dating situation. The challenge constituted approaching random strangers and talking to them with a range of basic and deeply personal questions, to elicit a certain response, while a true dating situation is about understanding people, connecting with them as humans, and developing a two-way bond with each other.

The challenge definitely has its own personal growth lessons though, and I believe that it must have been helpful for the others who went through it (I had my own takeaways as I shared above). It also clearly achieved the objective of challenging ourselves and forcing us to confront our fears. So just my post-challenge notes. :)

Update, Oct 2012: So after one month of intensive dating, various date coaching sessions, and various intense situations that made me reflect a lot about what I want in my life and love, I feel that I have developed my own voice where it comes to dating and romance. As such, I have decided to end my date coaching sessions with Kydon, and create my path and make my own decisions in the area of love and romance.

Part of the reason is that I feel that continuing the sessions would make me lose sight of my own agendas and goals, because being part of the sessions meant that there would be certain agenda/timeline to meet revolving dating (since the very nature of the coaching is date coaching) and it isn’t in line with my personal ethos in that I feel love should happen organically, not by a timeline.

Having fully immersed myself in dating in September though, today I know where dating and romance stands in my life. I know that dating and love is something that I want; at the same time, I do not wish for it to consume my life. Where dating is concerned, I would like for it to happen as I live my life, not something I put my life on hold to do.

The reason I dove headfirst into dating at first was because I always like to go full throttle on something to experience it fully and see what comes out of it, before making any conclusions. This immersion has been instrumental in my growth in love and relationships. The tips I share in 10 Steps To Attract Authentic Love ring even truer after this episode.

Moving forward, my focus is to work on my next long-term direction for PE, design my next webinar (likely on overcoming procrastination or increasing productivity), and create more great content. Stay tuned guys! :)

Update 2013: 7 months after writing this series, I met my soulmate. :) You can read about my love story and my guide to find your soulmate here: How To Find Your Soulmate (series)

This is part 5c and the last part of my review series on Lunch Actually, a lunch dating company in Asia, after trying out their service in 2012. Opinions expressed here are my own.