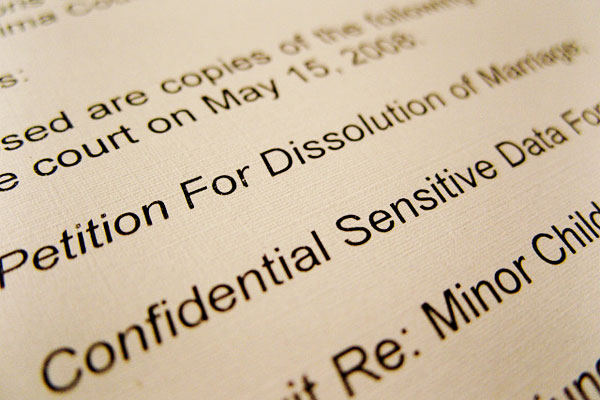 Lately I came across this insightful post by a divorced man (Gerald Rogers) sharing his advice on making marriages work, after his own 16-year marriage failed.

Given that I’m getting married soon, and while I know my relationship/marriage with Ken will be forever, it’s still useful to learn from someone who was in a 16-year marriage, was unable to make things work out, and has the benefit of hindsight. It helps to know what to watch out for and whether I’m on the right track in building my best relationship with Ken: and same for those of you in relationships or are planning to find soulmate relationships.

While some of Gerald’s advice are a little over the top (his advice as a whole seems to suggest that (a) you live your life for no one else but your partner, and (b) your partner/marriage (and no one/nothing else) should be the center of your universe — both of which are dangerous hallmarks of a co-dependent relationship), he shares certain relationship truths which I want to highlight in today’s post.

Advice from a Divorced Man after a 16-Year Marriage

/ Start of selected snippets of Gerald’s advice. My add-ons in blue.

Never stop dating. NEVER EVER take that woman/man for granted. When you asked her to marry you (or for females, when you agreed to marry him), you promised to be that man (woman) who would OWN HER (HIS) HEART and to fiercely protect it. NEVER GET LAZY in your love.

Celes: I agree. It’s the same for females: NEVER GET LAZY in your relationship. When your man proposed / married you, he chose YOU: YOU, above all other women. You might not have played an active role in the courtship nor been the proactive lover (e.g. your partner is the one who remembers the anniversaries and plans the surprises), but that doesn’t mean you should continue behaving that way.

3. Fall in love over and over again.

You will constantly change. You’re not the same people you were when you got married, and in five years you will not be the same people you are today. Change will come, and in that you have to re-choose each other every day. SHE (HE) DOESN’T HAVE TO STAY WITH YOU. Always fight to win her (his) love just as you did when you were courting her (when you guys were dating).

Celes: I fully agree with this tip. We are evolving, every moment of the day. We are not the same people right now compared to yesterday or last week.

Given that you and your partner are constantly growing into different people, your relationship has to evolve to match both of you: otherwise it will cease to be relevant. In growing, don’t forget to always be the best partner for your significant other (S.O.) and always care for your relationship. Be together because you choose to be together every day, not because you are legally bound to do so by marriage.

Focus only on what you love. What you focus on will expand. If you focus on what bugs you, all you see will be reasons to be bugged.

Celes: I wouldn’t say to focus only on what you love because part of your role as a partner is to help your S.O. be a better him/her by bringing (red flag) issues to light as they arise.

However, definitely focus on the things — qualities, practices, and/or beliefs — you love about him/her over what you don’t (if there are even any), because the former is why you chose him/her to begin with. These are the factors  to build your relationship upon, not the negative things you don’t like. Celebrate his/her goodness: don’t dwell on the undesirables. The nurturing approach is what’s going to soar your relationship to the next height as I wrote in step #10 of my authentic love guide.)

…your job is to love her (him) as she (he) is with no expectation of her (him) ever changing.

Celes: I wouldn’t use the word “job” because it sounds like some obligatory role to fill (when everything you do in the relationship should be initiated out of love).

However, I agree with the message, which is your “role” as a partner should be to love your S.O. with no expectations. This has been my stance from the day I got together with Ken, which is also why I never asked him to stop clubbing nor quit smoking. He sort of just decided to do that on his own.

6. Take full accountability for your own emotions.

It’s not your wife’s (husband’s) job to make you happy, and she (he) CAN’T make you sad. You are responsible for finding your own happiness.

Celes: Believe it or not, giving solutions when the other party is seeking empathy is a common mistake many men/women make! When your S.O. is expressing frustration or having a bad day, be his/her pillar of support by providing a listening ear, being there for him/her, and if needed: asking the right questions. There’s no need to take the role of a problem solver and dispense solutions because this may not be what your S.O. needs. He/she may just be looking for your support and to know that, hey, my baby is there for me.

Celes: This is exactly my advice for how to treat men too. I was asked by Her World magazine last week to give my advice on the topic “How to get your men to open up”. My number one tip? To give your man time and space. You don’t want to hard press your man to do anything because he may shut off. Or he may heed your wishes, but begrudgingly. Either way, that’s not what you want.

Always give your man the time and space to process his emotions and come to his self-realizations. The self-realized man is the better man for both himself and you: not one who is pushed into decisions because he can’t take ownership for them.

…you don’t have to have it all together. Be willing to share your fears and feelings, and quick to acknowledge your mistakes.

Celes: Openness (and trust that your S.O. will handle your vulnerability with care) is vital for any relationship to blossom. Allow your weak side to emerge in front of your S.O.; you don’t have to appear as the iron man/lady all the time.

Such openness didn’t come without resistance initially, as I wondered if allowing myself to be so open (particularly with my sadness and tears) would cause Ken to think I was crazy. But then I decided to give it the benefit of doubt and let my true emotions flow anyway. This has undoubtedly helped us grow closer together.

If you want to have trust you must be willing to share EVERYTHING… Especially those things you don’t want to share. Part of that courage is allowing her to love you completely, your darkness as well as your light. DROP THE MASK… If you feel like you need to wear a mask around her, and show up perfect all the time, you will never experience the full dimension of what love can be.

Celes: I wouldn’t say that sharing everything is a prerequisite to having trust, for you can give trust fully without the person being open. (Trust is more a function of your personal attitudes than the other party. The oneness mindset is the key.)

However, sharing is a prerequisite to a closer relationship. You can’t grow closer without being open, and being open includes being vulnerable (see previous tip) and transparent. And you can never experience your highest relationship with your S.O. if you put stoppers between both of you, such as withholding emotions, hiding thoughts, and self-monitoring your behavior.

Find common goals, dreams and visions to work towards.

Celes: I agree. This is important for both of you to individually grow and evolve your relationship to a new level.

Ken knows my personal goals extensively and I share my progress with him nearly daily. We also chat about his top goals and progress towards those goals regularly too.

As a couple, we discuss and set common visions (e.g. housing, finances, life goals, and our family relationships), which we work towards in tandem with our individual goals. We review said goals weekly/monthly. We work together even on day-to-day lifestyle goals: We shop for groceries and pick healthy food together. We exercise together every other day to keep fit. We make healthy meals together so we can nourish our body with the best nutrition.

This constant emphasis on growth renews our minds, bodies, hearts, and souls. Not only does it help us to grow into our highest selves, it helps our relationship to evolve to its highest level.

…and focus on the future rather than carry weight from the past. Don’t let your history hold you hostage. Holding onto past mistakes that either you or she (he) makes, is like a heavy anchor to your marriage and will hold you back. FORGIVENESS IS FREEDOM.

/ End of Gerald’s advice. For his complete post, visit this link.

While Gerald’s advice was targeted at males/husbands, I feel it applies to females too, and hence my inclusive message towards females throughout the article.

No one marries expecting divorce. (If you do, then you want to rethink marriage first before walking down the aisle.)

However, many marriages fail anyway. (For the ones that don’t, many spouses either live/sleep separately or commit adultery behind their partners’ backs, sad to say.) In a 2012 study conducted in England and Wales, 42% of marriages (in England and Wales) are estimated to end in divorce. In U.S., it is said that half the marriages end in divorce (or separation), which is an exceedingly high statistic. And in Singapore, over 7,000 divorces were filed last year (2012), which is slightly over a quarter of the marriages registered that same year.

While hardly the benchmark for lasting marriages, there have been some Hollywood marriages which I thought would last (longer than they did anyway), but didn’t. For example:

Don’t Take Your Relationship/Marriage for Granted

So yesterday, I went to the library to borrow books on relationships and marriages, with Ken joining me by my side: 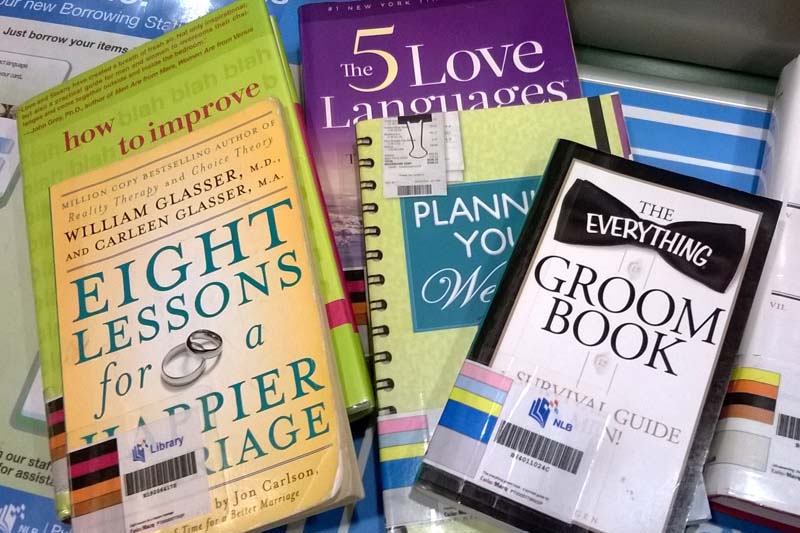 Books on relationships, marriage, and wedding preparation which we borrowed. I was showing Ken “The Groom Book” in jest and he decided to borrow it for fun, haha!

I’m looking forward to read “The 5 Love Languages” by Gary Chapman (even though I already know what it’s about) as it’s so highly acclaimed! The books on marriages (by random authors) will be a nice accent to his content. I’ll be sure to share any interesting lessons I pick up in the books.

What do you feel about the advice shared by Gerald (the divorced man)?

How can you apply the above advice to your relationship/marriage?

Any tips to share on making relationships/marriages work, especially those of you with kids?

Sound off in the comments area! 🙂

What If I Lack Physical Spark with My Partner?

Ask Celes: Are You Seeing Anyone at the Moment? What Is Your Biggest Obstacle to Finding Love?