Update Dec 29, 2010: Thanks everyone who tuned in and for all your kind words! ♥ Check out the photos and uploaded videos here.

Hey all!! I’m very excited to share that I’ve just been contacted yesterday by Channel News Asia to appear for a live interview segment next Tuesday! :D

I’ve been invited to speak on the topic of bucket lists, where I’ll share my bucket list, what bucket lists are for, and how it helps us to live a more fulfilling life. I’ll be part of a panel of other guests (there will be 4 of us in total I believe), and we’ll be interviewed by Flying Dutchman as part of the CNA BlogTV segment. Singapore readers will be familiar with him as the DJ for Class 95FM. :D 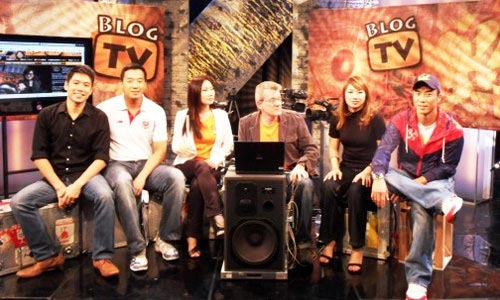 The interview will be aired live, both on Channel News Asia channel as well as online via the CNA Blog TV site. So for all of you who are not in Asia, you get to watch it too! :D Just log on to the CNA Blog TV page during the segment. It’s set for next Tuesday:

I’m SUPER excited about this, partly because this is my first time on national TV (that I’m aware of), in the capacity of my new self – someone who is pursuing her new life and creating it from scratch (from since 2 years ago when I quit my previous job), so I definitely see this as a huge milestone and an affirmation that I’m moving forward in my work and reaching out to more people. To me it’s like the universe is giving me a nod to say that “You’re doing great and you’re on the right track. Keep it up and keep on going!”

The second reason why I’m ecstatic is because last year I wrote my goals for this year, and one of the goals I wrote was to appear on CNA. Since this goal is more of a mark of affirmation vs. a specific goal to consciously strive for, I didn’t do anything about it, instead opting to focus on my core goals. So imagine my shock when I got a call yesterday from the CNA producer saying they’d like to have me on the show! I was out of the world ecstatic – at the same time I was a mini mind-warp because the same thing happened when I wrote about appearing on CNN on my bucket list (which manifested earlier this year), as well as speaking in a regional conference (I was invited to speak in a HK conference 2 months ago in Oct). Some readers have also told me that they’ve seen Personal Excellence featured in Guardian (UK), India papers, along with other publications too this year, though I’ve not been able to get hold of the supposed articles.

I think this is an affirmation of the importance of writing down your goals, as I’ve shared in Live a Better Life in 30 Days Program and throughout the site. Every goal is created twice: First in the mind, then in our reality. In order for our goals to manifest themselves in reality, we’ve to first be clear of them in their mind, and the process of writing them down and putting them in our vision board helps us to make them crystal clear.

I’ll update this post soon once I get details on the segment timings from the producer. I’ll also update on my FB and Twitter, so keep a look out there.

In the meantime, is there any kind soul here who is able to help me record the segment on the web and on TV? I’ll love to be able to get a copy for my viewing, and probably to put up on Personal Excellence for other readers to see. You’ll have my eternal gratitude! Let me know via the comments or the contact form if you’d like to help.

Other Media Features this month: Simply Her & Edvantage (Asia One)

On media-related updates, I’ve been quoted in other media outlets this month (Dec ’10) as well. If you read Simply Her magazine, you’ll find my contribution to an article in this month’s issue (Jan issue), on setting new year’s resolutions that work (page 120). I’ve also been quoted in Edvantage (Asia One)’s article on “Should you go back to school?” If you’re someone looking to return to school after working for a period, you might find the 8 tips there helpful.

Ask Celes: What is Your Ultimate Goal for Personal Excellence?

Media Coverage in My Paper