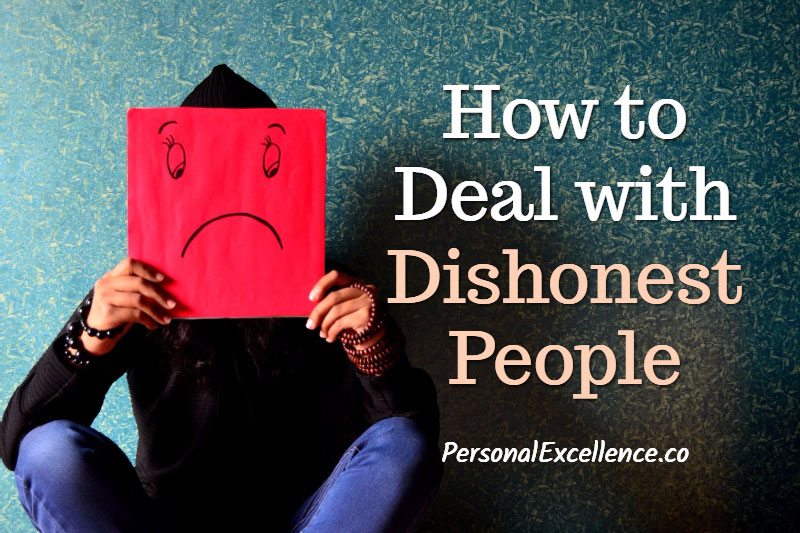 Dishonesty is a quality which conflicts with truth. Many of us have probably experienced dishonest behavior by others at some point in our lives, be it people keeping secrets, lying, keeping up a facade, being hypocritical, or trying to cheat us. In general, dishonest behavior tends to be dominant among people with low consciousness.

While we can try to stay away from such people, dishonest people still slip into our lives from time to time. So how can we deal with them effectively?

For this article, I’ll be covering dishonesty in the context of people acting in an untruthful manner for their personal agenda (as opposed to lying for the well-being of another). Meaning, white lies won’t apply here. Here, I’ll be talking about people with a tendency to manipulate, who lie for their personal gains, and who have no care for another person’s well-being.

My Experiences with Dishonesty

Given that truth is one of my core values, dishonesty sits at odds with me. In fact, one of the things I pride myself at doing is being authentic, open, and truthful in everything I think, say and do. If you are a long-time reader of PE, you will know that this is exactly how I write my blog articles and how I’ve been running my business all these years.

Having said that, this doesn’t mean that I’ve been always honest when I was much younger. There have been numerous times in my past where I was dishonest and felt ashamed of it afterward. For example, one time when I was 6 or 7, my brother and I quarreled and I took a dollar or two from his savings bank out of anger. He later found out and I returned the money. During those times, I never understand the ramifications of my actions. It was only when I reflected on my actions afterward that I understood the implications.

Growing up, there were times when I trusted people, some of whom I thought were friends, and had that trust broken. When I was in primary school, I had a good friend who repeatedly backstabbed me by badmouthing me. There have been cases where I collaborated with people and they disappeared midway, without any explanation. When I was 18, I joined a multi-level marketing company for a while, where I saw how the leaders would manipulate people against their wishes through subliminal and persuasive techniques. It was a perfect example of how I never want to conduct my business or behave in real life. And then after I started my business, I experienced a few cases of online fraud. Fortunately most of the times the tricksters failed or not much was lost.

It was from these negative experiences that I saw the true value of honesty. They led me to orientate myself fully to the path of truth.

Yet, I strongly believe that everyone, whether dishonest or not, has goodness in them. When someone comes across as dishonest, it’s usually because of unintended behavior or erroneous judgment on the person’s part, rather than pure malicious intent. These people are largely unconscious of the implications of their actions on others. If you try to dig deep into the fundamental cause of their dishonesty, you may find that their dishonesty is due to a desire for love or acceptance, or to address a personal need, rather than because of ill desires.

The next time you come across a dishonest person, try to stand in the person’s shoes and see things from his/her perspective. Chances are you will be more receptive to the circumstance that led him/her to act that manner.

When dealing with dishonest people, the first step is to root yourself in a high level of consciousness. An immediate way to increase your consciousness is to clear out your mental clutter via meditation. Meditation helps me raise my consciousness by several notches in just five to ten minutes.

Next, after you’ve raised your consciousness, ensure that you remain in this high consciousness state. A great way to do this is to imagine a safety energy shield around you that only allows good energy in, but blocks out bad energy. I typically do this visualization during my morning meditation, and then go about my day.

Now, some people will recommend that you give the treatment of “an eye for an eye.” That you return an action that matches your injury, and these dishonest folks should get retribution or bad karma for their negative actions, and this bad karma should come from you.

I can understand why they would say that. After all, the bad agents of society should not go scot free without due punishment (for example, swindlers who cheat old people of their life savings).

However, I’ve found that such reactions do not bring you anywhere at the end of the day.

The same applies for low-consciousness reactions such as anger and violence. Unless these people are introspective, reacting to them in such ways will only push them further into their current behaviors and cause them to stay put in their low consciousness, as opposed to helping them.

Step 3: Respond With Genuineness and Honesty

Instead of a fear-based attitude, react to the person with a love-based attitude. Treat the person with emotional generosity — honesty, kindness, love, and positivity, all in one. If you want others to be honest, then start off by being an example of what honesty is, so others can follow suit. Treating a dishonest person with honesty is a more effective way to raise his/her consciousness than reacting with dishonesty.

If you need resolution for a particular thing that they did, then do it while (1) maintaining a high level of consciousness, and (2) being completely earnest in the resolution process. Ask for private 1-1 time with the person. This is to prevent any unnecessary conflict or shaming. Then, in a calm manner, tell them your side of the story, and hear them out.

If you start to slip into anger or deceit/manipulation (dishonesty), you have not raised your consciousness to a high enough level or grounded yourself well enough. Keep working on Step #1 until you can be in a calm state naturally, even in the face of dishonesty.

The dishonest person would be surprised at your behavior, since he/she would likely have expected dishonest or catty behavior in return. He/She would probably doubt your intentions and think you have something to hide. That’s perfectly okay. Dishonest people usually operate in a mode of suspicion, fear, doubt and greed, making it hard for them to understand how honest people think. After all, they are not used to people treating them with kindness and honesty.

In the best case scenario, the person will lower his/her barrier and reciprocate with honesty. This will happen if the person’s consciousness is not too low, which allows him to be receptive to positive behaviors.

In the second possible scenario, the person will react with resistance — whether via anger, denial, or panic. Contrary to what some may think, this is a positive sign. Every force has an equal and opposite reaction. This resistance is in response to your honesty. Underneath the harsh exterior, the person is trying to reconcile your actions with their mental model of reality, since it’s telling them that their mental model is faulty. With continued effort, you may get through to them.

The last possible reaction is a neutral state. The other party has no reaction and continues on with their dishonest behavior. This happens if the person is so entrenched in their low state of consciousness that they cannot be helped. If so, you’d want to consider Step 4.

This step is applicable if:

An ultimatum is a final statement of terms made from one party to another. Your ultimatum can be done face-to-face or via email or a letter, whichever way you prefer. Because this person may be oblivious as to what’s been happening, you should be thorough in your ultimatum. Give him/her the background as to where you are coming from, details where necessary, the impact of his/her dishonesty on you, and your expectations for this relationship to continue. Let the person know your desire to continue the relationship, so he/she understands that it means something to you.

If you have a strong connection with this person, he/she may get a sense of the severity of the situation. If he/she is receptive to your effort, he/she may try to work things out.

Sometimes, the dishonest act may be by someone you don’t know well or don’t have an existing relationship with. If that’s the case, an ultimatum won’t be necessary — skip to step 5.

Step 5: Cut the Person Away

If steps 3 and 4 don’t work, it comes to the point where you need to cut him/her away.

While you may have the best intention to help the person, sometimes the best thing to do is to cut him/her away. When you tolerate dishonesty, you do yourself a disfavor by allowing yourself to get taken advantage of. You are also letting the person think it’s okay to continue their dishonest behavior. Remember, it takes two to tango. As much as he/she needs to take onus for the dishonesty, you have a role to play as well if you keep tolerating this behavior.

Some ways to do this will be by a) reducing contact with the person or b) officially ending the relationship. Method (a) will be more applicable if the person is an acquaintance or friend you are not particularly close to. If the person is a good friend or business partner, I’ll recommend method (b), officially ending the relationship and explaining why, since it’s most aligned with truthfulness and honesty. This is what you would want to advocate to the person as well. Let him/her know the reasons behind your actions and why you have to do what you are doing.

Then, move on to positive relationships which support you to be a better person, just as you support them to be better people.

Sometimes, cutting dishonest people away doesn’t have to be permanent. This time apart may be a chance for both of you to introspect. They may also face other situations which push them to become better people. After a few years, they may change for the better. When this happens, perhaps both of you are now ready to give your friendship/relationship another go.

If you are dealing with dishonest people, try the steps above and see how it works out. Remember, you are the CEO of your life and you have full responsibility over what happens to you. Never victimize yourself or push blame to others around you. No matter what happens, you always have the power to choose your path ahead. :)

‘Why I Love My Father’: A Father’s Day Tribute

Before You Speak, Think [Infographic]

Ashley Madison: Why Cheating Is Not The Solution