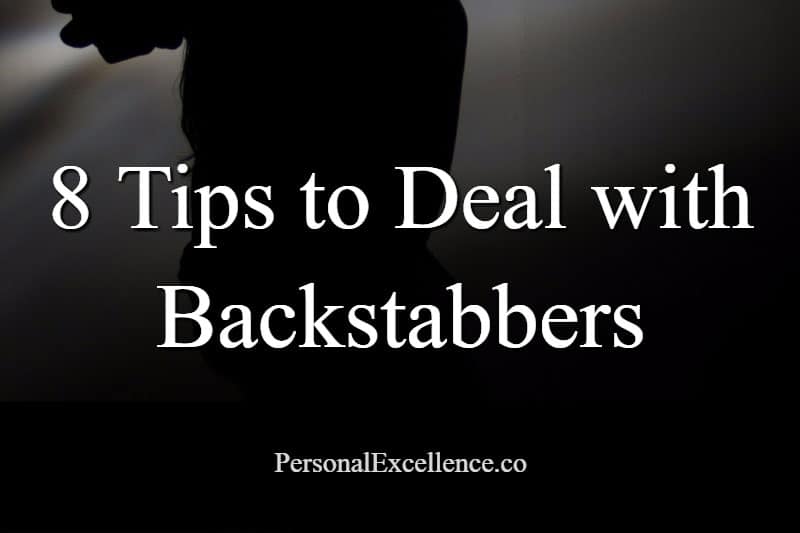 Recently I learned that a good “friend” backstabbed me by badmouthing me in a malicious way. It wasn’t your innocuous, everyday gossip — it consisted of vindictive statements that cast doubt on my character.

When I heard it, I was furious of course. What kind of “friend” speaks of friends like this behind their backs? How about values of loyalty, trust, and respect? Have they been thrown out of the window?

However, after feeling angry about it for a short while and realizing that this was simply ridiculous and a waste of my time, I began to turn this around and move on. If you’re dealing with a backstabber at the moment, I feel you. Here are 8 tips to deal with backstabbers.

​How to Deal with Backstabbers

Stay calm. No matter how pissed off you are, gather yourself first. An irate person will only commit irate actions, and sometimes you may say things that you regret later. Take a few minutes, even a few hours, to digest this information first. If needed, sleep on it. Once you feel calm enough, proceed to the next step.

Sometimes rumors can balloon out of control as people add their own interpretations to events. Worse still, some people may make up stories to sow discord between you and your friend. Hence, you want to fact check the story first before jumping to conclusions.

For me, when a third party told me that my “friend” said certain bad things about me, I then asked for explicit information, like what exactly he said, the context he said it, and why he said it. I then asked for the third party’s permission to see the messages, and saw for myself the whole conversation thread, along with the backstabbing comments. It was clear beyond doubt that this was real, and the next step was how to deal with it.

Then, I did damage control by rectifying the statements made. I shared my side of the story to whoever they were aired to. While it was still up to the person to make his/her conclusion, at least I have said my piece about this situation rather than leave things hanging.

If you have been backstabbed, take a step back and evaluate your situation. Has there been any “damage” done? Yes? No? If yes, what is this damage? Is it damage to your reputation? Damage in terms of potential business deals? Damage in terms of friendships? For the damage caused, what can you do to reverse it? Address the damage as best as you can within your locus of control, and then…

4) Clarify with the person if you can. If not, cut this person away

For this friend, this wasn’t the first time such an issue occurred. For the past few months, I had dealt with a variety of misunderstandings and issues with him. So when it came to this situation, especially the gravity of it (outright attacking my character in front of a business acquaintance), I decided that it was time to cut off the friendship.

So I cut him away. It wasn’t just this one incident, but the series of incidents that led up to this (a lot of negativity, angry outbursts), that made me realize that it was time to move on. The friendship was clearly not what I thought it was, and I had wasted too much time trying to make it work.

I wrote more about handling betrayals by friends here: What To Do When You Have Been Betrayed by a Friend. And here’s an article on when it’s time to end a friendship: Why I Parted Ways With My Best Friend of 10 Years

One of my biggest qualms is that people might have bought into what the badmouther said and used those words to form their impressions of me, thereby making it impossible for me to ever form a true relationship with any of them. My life mission is to connect with everyone in the world, and to know that some people might have closed their hearts from me because of comments made by another was truly devastating.

To address this, I simply learned to… let go. Sometimes you can’t control everything, and the only way to be “in control” (= stay calm and happy) is to be okay with not being in control. Rather than obsess about something I cannot effect, I would do better by letting that go and focusing on the things I can effect. (Read the next tip.)

Read: 10 Timeless Principles To Be Happy

Actions will always speak louder than words. I can explain my side of the story all I want but at the end of the day, it is simply one person’s words against another. Who’s to say one is more right than another? Everyone always has his/her side of the story, and both parties will always be right in their own world.

So, I decided to correct the false picture not through words, but actions. How? By ensuring my behavior is true to my core values of Excellence, Love, and Truth, something that I already strive to do every day.

Recently I met an esteemed business investor and he told me, within our first few meetings, that he was very impressed by how I walk my talk, something he doesn’t see often in other people, if at all. I thought it was a huge stamp of approval coming from him as he is already in his 60s, has set up and IPO-ed countless businesses, and has worked with countless people in the 40 over years he has spent in the business world.

His comment reminded me that as long as I do my thing and live true to my conscience, people will naturally know what I stand for as a person. You show people you are a good person not by saying you are one or even putting down others, but by taking actions consistent with what you define as being a good human being.

At the end of the day after you live true to yourself, people are still free to make their own conclusions. Some may choose to negatively judge you despite everything you do. However, as long as you know your values and take actions consistent with them, your actions will shine more brightly than whatever people try to say about you. Don’t serve to please others; live your life in a way you can be proud of.

For more on values, check out Day 15: Identify Your Values of my 30-day program, Live a Better Life in 30 Days.

I always believe there is something to learn from every situation. This incident is no different.

From this episode, I learned quite a few things about myself, surrounding my fears, anxieties, and treatment of friendships. I learned to be more appreciative of true friends who have always been there for me. I learned to be more sensitive to others’ feelings. I also learned that I can be dead wrong in my judgment sometimes, and what I think is my intuition can just be a bad oversight.

Above all, I learned to stick to my guns and stay true to what I stand for, instead of shirking myself out of fear of non-conformance with the world.

If you are serious about creating an impact, you are bound to ruffle some feathers here and there. Here’s what: ruffle those feathers anyway. Know that your job here isn’t to please everyone, but to stay true to your mission and create the largest, most positive impact to as many people as you can. Other people can put you down but you will always have your voice.

I shared this Winston Churchill quote before in the take credit post, and I’m going to do it here again before it’s such a wonderful quote: 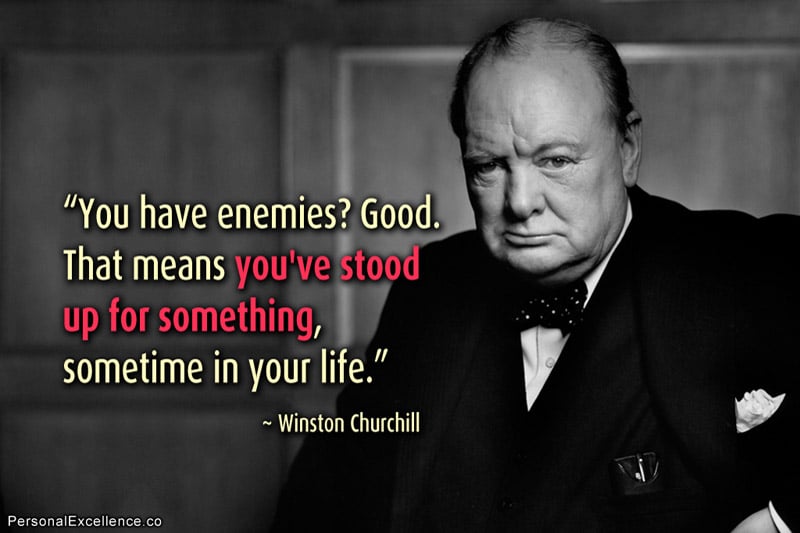 8) Look at the big picture

While I was appalled when I found out about the “betrayal,” I got over it after a few hours. In the big picture of things, the incident was just insignificant. There are too many things I need to do, too many goals I have to achieve, to be bogged down by one person’s vendetta.

For example, we have a meteorite that just hit Russia, injuring over 1,000 people. Up north, we have North Korea doing secret nuclear tests. Down south, kids in South Africa are dying every day due to famine and diseases. Then over in America, fundamental social issues beg looking into. The number of homeless people in New York City continues to rise every year. Schools in the U.S. continue to be plagued by shootings, now becoming an almost weekly occurrence.

I reckon if you just found out that you got “betrayed,” you must feel pretty miffed. Shocked. Surprised. Angry. Livid. Feel those emotions, vent to your friends if you have to, and then get over it. There are so many other things to concern yourself in life. Why let yourself be bothered by something as tiny as this?

Read my series on addressing anger, starting with part 1: My History with Anger and How I Let Go of It, Part 1: Growing Up in a Household of Anger

Have you ever been backstabbed? What happened, and how did you address it? Or are you undergoing a backstabbing episode right now? How can you apply the 8 tips above?

How To Be Patient

How To Know What You Want To Do In Life

What To Do When You Have Too Many Passions

Ask Celes: Has Anyone Ever Discouraged You From Working on Your Blog?

How To Manage Office Politics, Part 3: How To Master the Game and Excel in Your Career