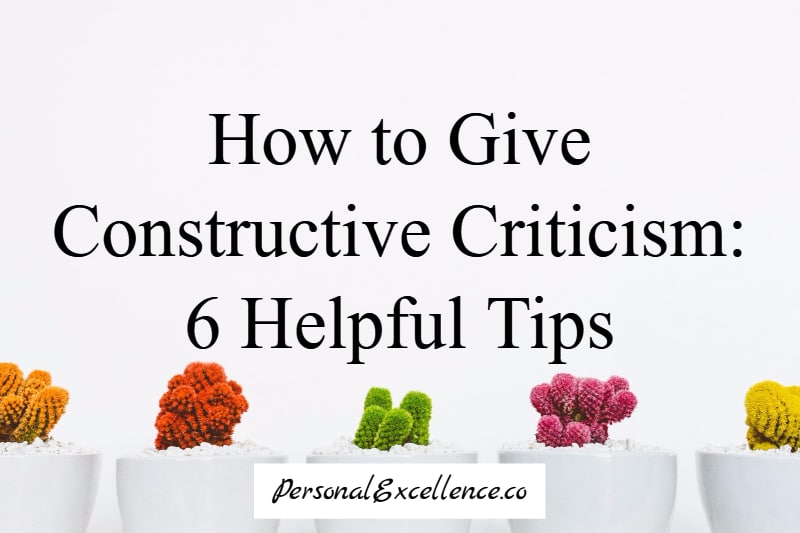 “People seldom refuse help, if one offers it in the right way.” — A. C. Benson.

Have you ever given suggestions that were subsequently ignored?

Have you ever given critiques that were not well received?

Have you ever wanted to give constructive criticism on something, but held back from doing so because you did not know how to convey your ideas across?

How to Give Constructive Criticism in 6 Steps

Today’s guide is on how to give constructive criticism to someone. Whether at work or in relationships, sharing and receiving feedback is part and parcel of improvement. If you have ideas on how someone can improve, don’t hold your ideas back — rather, share your criticism constructively.

Of course, to be sensitive to others’ feelings and offer feedback when you feel the other person is ready to take it. Otherwise, you may come across as imposing your views on others, especially if you repeatedly tell others what to do without them asking for your opinion.

1. Use the Feedback Sandwich

The feedback sandwich method is a popular method of giving constructive criticism. It is often used in Toastmasters and in the corporate environment. I refer to the feedback sandwich as PIP, which stands for Positive-Improvement-Positive. I know there are people who use PIP to represent Praise-Improve-Praise which is different from my version of PIP. Read on.

With Positive-Improve-Positive, your feedback is broken down into 3 segments:

It’s called the “feedback sandwich” because you wedge your criticism between an opening and an ending — like a patty wedged between two buns.

Here’s an example: you want to critique someone on their website. Here’s how PIP can be used:

The feedback sandwich is a good framework for providing constructive criticism because by starting off with the positive comments (the first “P”), you let the receiver know that you are on his/her side and you are not there to attack him/her. You are also recognizing things that the receiver is doing right, rather than only talking about the issue areas which can come across as being rude — especially if both of you don’t really know each other to begin with. The receiver then becomes more receptive to your critique (the “I” in PIP).

After sharing the things you don’t like or feel can be improved, round off the criticism with more positive points (the last “P”). This helps your critique end off on a high note, rather than leaving the recipient with a sour taste in his/her mouth. It also reminds him/her what he/she is doing right and reinforces the benefits of acting on your critique.

The feedback sandwich method is most appropriate when you are giving criticism to people you don’t know or don’t know well. Otherwise you may come across as very aggressive and rude if you just jump right into the critique. This is especially true in the Asian culture. Over time though, you can go right into the critique if you have established a rapport with the recipient and he/she is familiar with the way you think.

Some people may dislike using the feedback sandwich as they think it’s silly to praise for the sake of it. But the point of the feedback sandwich isn’t to give false praise or to butter people up. People are often quick to criticize, judge, or even shame, and it downplays what others are doing well and the effort they have put into their work. I see the feedback sandwich as a great way to (a) practice emotional generosity, because we sure can work on being more generous in supporting people’s hard work, (b) help the person learn what he/she is doing well, and (c) use this as the foundation to share what can be improved on.

2. Focus on the situation, not the person 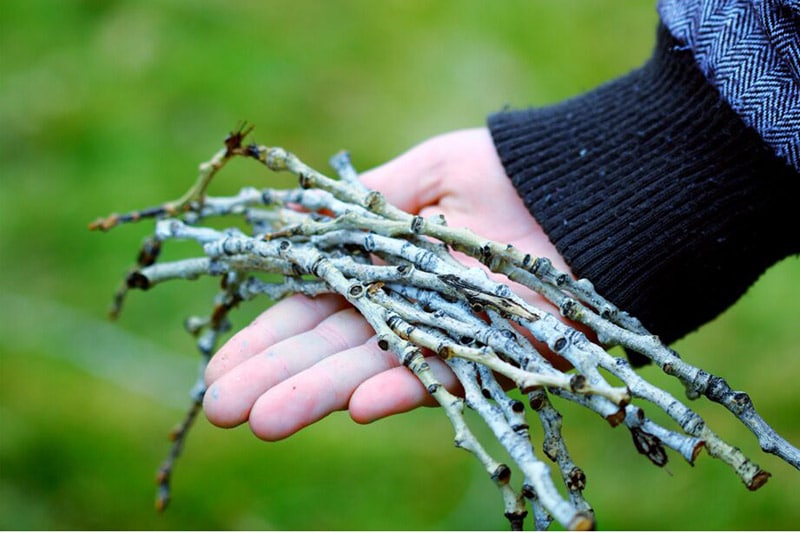 Constructive criticism focuses on the situation, not the person.

How to apply this tip:

3. Be specific with your feedback 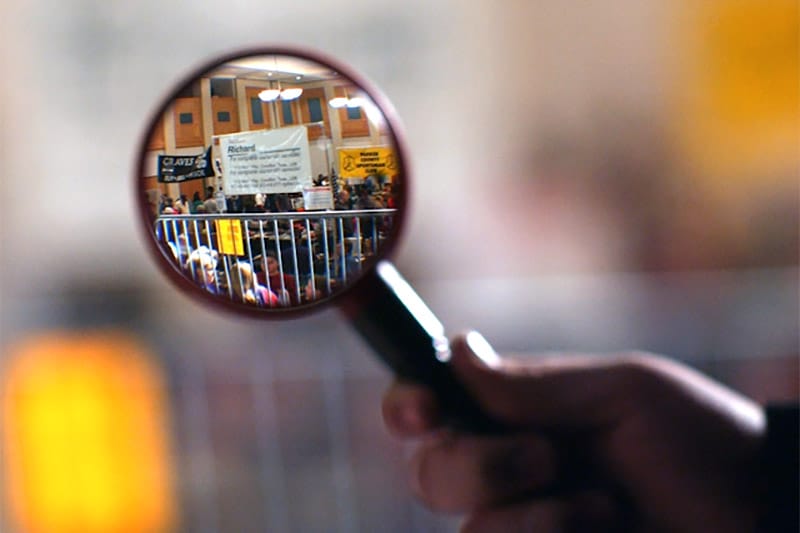 The third tip to providing constructive criticism is to be specific.

I receive a lot of feedback in running PE. The more specific someone is when giving the feedback, the more actionable it is for me. Here is an example of a vague vs. specific feedback:

The first feedback is very broad — “communication” is a very general topic. While I can identify some subtopics under communication like “networking,” “body language,” “small talk,” and “public speaking,” the subtopics that I choose may not be what the reader really wants.

With the second feedback, it is more actionable because it is so specific. It tells me right away that “Hey, there’s a request for public speaking articles,” after which I can then plan for an article or series on public speaking. There is no confusion.

That’s not to say that vague feedback is stupid or bad. It’s just that specific feedback helps me understand the user’s needs more easily, which makes it easy for me to serve his/her request. Likewise, it’s the same for you — if you want very actionable outcomes, if you want people to help you in a more targeted way, give specific vs. vague feedback. Specific feedback that doesn’t target the person as I shared in tip #2.

Here is another example of vague vs. specific feedback. Say you’re giving feedback on a report:

Here’s how to make your feedback specific and hence actionable: 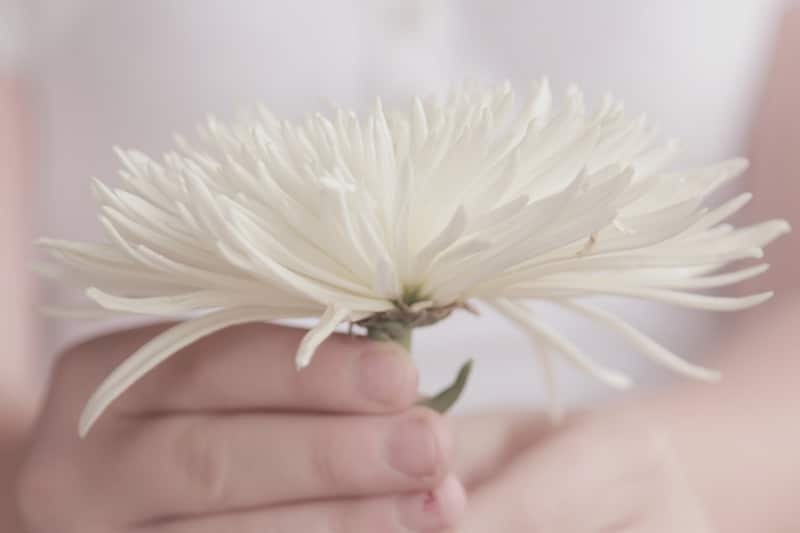 The whole point of giving feedback is to help the person improve.

Let’s look at an example. Say your friend is in a singing competition and she has entered the finals. She asks you to critique her performance. Here, actionable critique would be talking about her overall performance, her pitch, her body language, and perhaps even her song choice.

On the other hand, talking about how her voice is too husky probably isn’t very helpful because firstly, if she can get into the finals, it probably isn’t a real “issue” to begin with. Secondly, it’s not something she can change. Thirdly, such a feedback is highly subjective. There are people who like husky voices just as there are others who prefer other kinds of voices. While you can point out things that you don’t like (e.g. if you find her voice too husky), making it central to your critique probably isn’t very helpful for her.

In another example, say your friend just started a new restaurant. He has signed a rental lease for 12 months and the location has average foot traffic. He approaches you for advice to market his restaurant.

Saying things like “change your restaurant location” isn’t helpful because the lease has been signed. You should point out the problem with the restaurant location and recommend that he consider places with high foot traffic if it’s possible to change the location, but focusing 100% of your energy to bash his poor location choice isn’t really going to help.

On the other hand, suggesting ideas that can counteract or mitigate the average foot traffic will be helpful. Actionable ideas include to invite food bloggers for food tasting, to do a media launch, to give promotional discounts, to create a buzz-worthy event to get people to visit the restaurant, and to place advertisements in lifestyle magazines.

Knowing what’s actionable and unactionable requires you to be empathetic. Understand the person’s situation and his/her objectives, then provide your critique based on that.

5. Give recommendations on how to improve

When all is said and done, give recommendations on what the person can do to improve.

With your recommendations, I recommend to (a) be specific with your suggestions and (b) briefly explain the rationale behind the recommendation.

Example: Giving feedback on a presentation

My final tip for giving constructive criticism is not to make assumptions. When providing criticism, do so within what you know as fact about the person and the subject. There’s no need to make any assumptions. Not only does it make the person look bad, it also makes you look bad — especially when your assumption is wrong.

Here are 3 examples to highlight the difference between an assumption and a critique/comment:

As they say, when you assume, you make an “ASS out of U and ME.” Not having a presumptuous attitude will go a long way in any communication, not just in giving criticism.

Get the manifesto version of this article: The Constructive Criticism Manifesto

The Emotional Journey of Creating Anything Great [Infographic]