This is part 2 of my review for T. Harv Eker’s “Never Work Again” seminar held in June 2010. If you are new here, start with Part 1: Never Work Again Seminar: Introduction first. 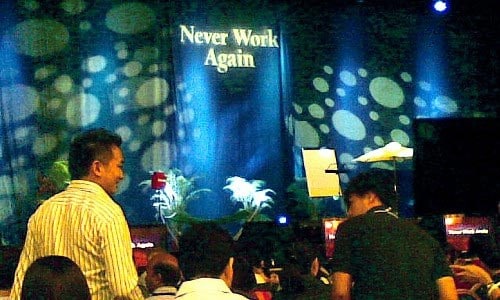 As promised in my previous post, I’ll be reviewing T. Harv Eker’s Never Work Again 4-day seminar for the benefit of all readers. I just finished Day 1 yesterday and decided to write a daily review so that I can capture the thoughts while they are fresh.

Overall Day 1 was disappointing. Honestly, I entered the seminar very eager and excited to learn and absorb new knowledge. But it fell short. I learned some concepts and strategies, but these didn’t measure up to the time spent there in total (9am-11pm; I left at 9pm) and certainly not with a seminar price tag of SGD 1,000-3,000 (USD 800-2,400). It honestly felt like the content was immensely stretched to fit the entire day and the lessons came across as really thin and sparse.

I was expecting more as T. Harv Eker is supposedly a top guru in the seminar circuit alongside folks like Anthony Robbins. I’ve heard great things about his course MMI (Millionaire Mindset Intensive), and from what I’ve seen from the MMI booklet, it does look like a solid content-based course. NWA is supposed to be a level-up course compared to MMI which is a foundational one, but it certainly doesn’t come across that way. If anything, it felt more like a pitch fest to me.

I thought they were being generous; I’d personally give it a 3/10. In fact I gave it redeeming points for being a large-scale seminar, which I find quite energizing to be in the company of hundreds of other people with the same end goal. I feel this has more to do with the audience than the trainers though. Excluding this, it’s more like a 1/10.

I do think that I’m probably more critical as I’m a trainer and more sensitive to what makes good training. While the average conference member may get humored by jokes and ra-ra action, I think the bigger questions to think about as a trainer are

This is the benchmark I use for workshops that I attend and conduct. NWA Day 1 didn’t quite cut it for me.

The important thing is giving Day 1 a score of 3/10 doesn’t mean that I feel I can do better or I know better; it just means that I’m measuring them against the highest standard which all of us should do, really.

For what it’s worth, this NWA seminar run isn’t conducted by T. Harv Eker himself — it’s hosted by his trainers, Marjean and Marcus de Maria and an ensemble of speakers. I’ve a feeling that it might have been better if he hosted it*. Harv appeared by way of a recorded video clip from his past workshop which I found to be one of the better segments of the day.

*Update: I subsequently spoke to people who have attended his live talks/seminars before and apparently he uses audience shaming techniques like insulting/criticizing people who walk out or go to the bathroom while he’s talking, insulting people who don’t buy the products at the end, guilting people into buying, etc. Reader Don shares his experience here. This is a very fear-based training tactic, and it’s not something that I endorse as a participant nor trainer.

In this regard, especially in light of the fact that the NWA seminar is actually more of a sales pitch fest than a content-driven seminar (refer to the next 2 parts of this series to learn more), I don’t think that the seminar would be all that different whether he was the one conducting it or not.

Here’s my overall observations that led me to give a score of 3/10:

Each segment ranged from 1.5-2 hours. Due to intellectual property reasons, I’ve listed down the topic of the segments but not the actual titles. Out of these sessions, only a few had some content, while some were merely sales pitches — which I’ve indicated in asterisks:

* These are sales pitch sessions. They follow this general formula: (1) A 10-minute introduction on why this particular method creates passive income, (2) 15-minute brief sharing on how they do it, followed by (3) 20-minute sales pitch for their course/program to learn this skill so you can create passive income for yourself.

Note that the above is my own assessment based on my needs.

I’m still optimistic about the seminar by the way — perhaps Day 1 starts off slow with higher value content put in the later days so that participants end on a high note. In particular I want to learn more about passive income strategies for businesses, which I trust that they are covering for Day 2 or 3. Let’s see how tomorrow pans out. Look forward to getting to the real stuff soon. :D

The Day I Quit My Job to Pursue My Passion: 6 Things to Do Before You Quit Your Job 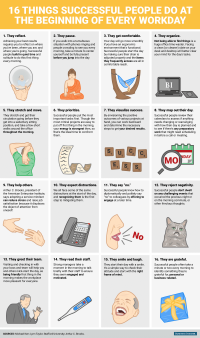 The Night I Cried