This is part 1 of my 3-part series on how to get on the Dean’s List. 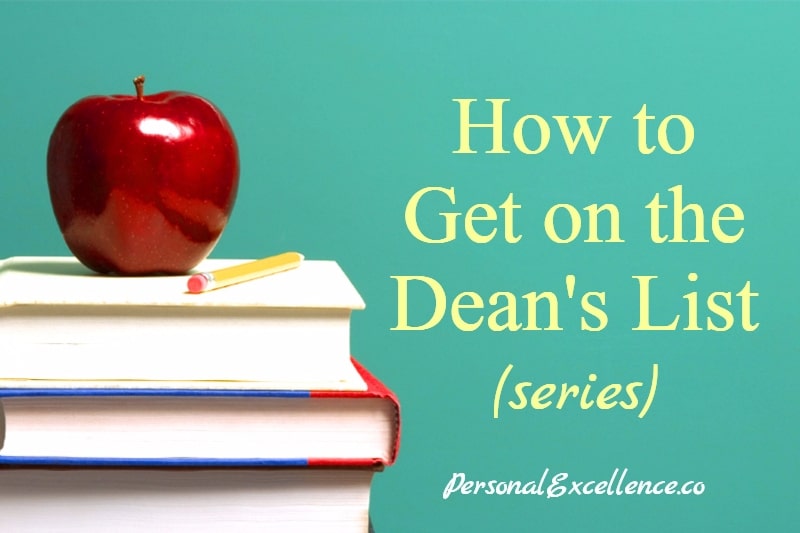 Recently I noticed that there are many students who read this blog. So I figured that I should write a post on how to get on the dean’s list. This post will be beneficial for any student, not just university students, as it’s about achieving academic excellence.

Even if you’re reading this as a second- or third-year student, you can still use the tips for your remaining semesters and graduate with a high grade point average. :)

Dean’s List should be a familiar term to university students and graduates.

A Dean’s List is an academic award, or notation, used to recognize the level of high scholarship demonstrated by students in a college or university. It is often synonymous with honor roll and honor list, but should not be confused with honours degrees.

Generally, students enrolled in college or university would need to satisfy a series of specific requirements before receiving the Dean’s List. These requirements may differ across institutions, but in most cases will require students to enroll in a full-time capacity, to achieve a specific grade point average within the academic term, and to maintain a specific cumulative grade point average throughout enrollment.[1]

Dean’s List is an honorary roll assigned to the top students. As the Dean’s List is generally awarded to the top few percentile of students, the GPA cut-off to get onto the Dean’s List varies across faculties and academic semesters. If I were to give a ballpark estimate, your GPA has to be at least 3.6/4.0 or 4.5/5.0 (average of A- and A for all subjects) to be considered for the Dean’s List. If it is a highly competitive semester where everyone scored very well, the cut-off will be higher.

When I was studying in the National University of Singapore, I was on the Dean’s List for all 3 academic years of my studies. The NUS Business School is a competitive faculty (it’s a leading business school in Singapore and the Asia Pacific region), with students from top junior colleges and scholars from the neighboring countries, so it was an accomplishment to be on the list. I graduated in 2006 as the top student in my specialization of Marketing. In my graduation year, I was given awards for being the most outstanding student.

Looking back, university years were my favorite years in my entire two decades of education. I felt very stifled growing up as a kid in primary school, and the transition from each phase of the education system, all the way to university gave me increasing liberty as a student and a person. Thinking back, the Asian and Chinese culture greatly diminishes the worth of a child by virtue of their age, and I felt like a square in a round peg hole growing up. I felt like I was repeatedly being beaten to fit a mold in the Singapore education system, and I never knew what was going wrong until I was much older.

In my opinion, seniority and disciplinarian approaches — typical of the Chinese culture — do not bring out the best in students or people. Even though there is merit behind these approaches, it is only a short-term effect as these approaches are fear-based. In the long-term, they tend to stifle and suffocate. I share more here: Stop Shaming, Start Praising: What I Learned From Growing Up in a Shaming Culture

There are benefits from being on the Dean’s List. Some are important benefits, while some are fringe benefits. As a disclaimer, these are benefits that I experienced as a business student during my time in university (2003-2006). They may not apply to other universities or faculties or time periods, though I don’t think they would differ much.

While it was exciting being on the Dean’s List back in university, don’t associate it as part of your identity. At the end of the day, this is an external achievement like everything else in life — your car, clothes, material possessions, property — and they will shed away one day when you die. The most important thing is to recognize this as a form of personal achievement, and that being on the Dean’s List is a means to help you with other goals in life, such as employability and career success. Don’t attach yourself to external achievements, but your intrinsic values and mission in life.

This is part 1 of my 3-part series on how to get on the Dean’s List.

How Students Can Overcome Their Fear Of Failure

I Just Graduated. Should I Go for My Dream Job or Continue Studying?

How To Overcome Distractions When It’s Time To Study