My Paragliding Experience in Cape Town!

Hi everyone!! 😀 Today, I’m excited to share my paragliding experience when I was in Cape Town last year! This post is LONG overdue, given that I’ve been meaning to write it before I got engaged, married, and all! (Speaking of which, I have yet to share my wedding photos and footage with you guys, so stay tuned!)

Paragliding is an adventure sport where a person glides through the air using a wide canopy, a fabric wing that’s made up of a large number of interconnected cells. In paragliding, the pilot “takes off” from an elevated position, usually the top of a hill or mountain, then uses wind forces to help him maintain flight — sometimes even gaining altitudes! Throughout the flight, the pilot sits in a harness suspended below the wing. 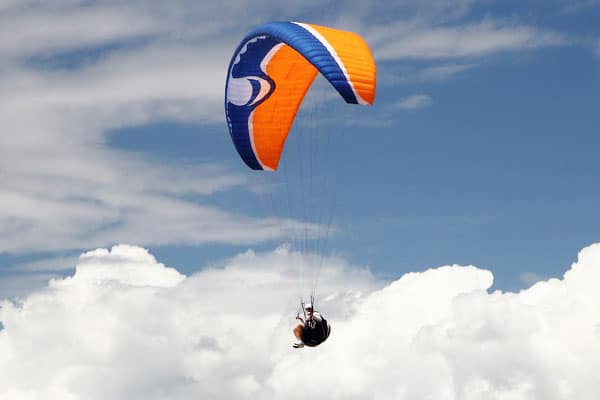 While skydiving only lasts for a few minutes since you’re free-falling (and slowing your descent with a parachute towards the end), a skilled paraglider — relying solely on wind forces and thermals —  can stay in flight for HOURS and cover hundreds of kilometers!

So last year, I was in South Africa for personal travel (this was before Ken and I got together). PE Reader Lizette learned about my South Africa trip on Facebook and graciously offered to host me if I were to visit Cape Town. So excited to receive her invitation that I took it up right away!! (She would later become a sweet and dear friend!)

I subsequently learned that Lizette is a licensed paraglider and she has licensed tandem-paraglider friends who could take me paragliding if I wanted to. Since I had never done any extreme sport before, I immediately said, “YES!!!”

In Cape Town, there are two popular paragliding launch spots: Signal Hill and Lion’s Head, which are 350 meters and 669 meters above sea level respectively. Lion’s Head is the more popular spot, since it allows for a longer flight and better flight scenics.

I’m lucky enough to have paraglided from Lion’s Head, not once, but TWICE during my trip!! 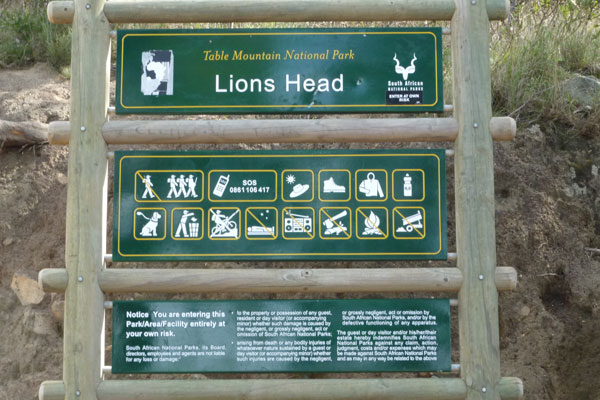 At the entrance of Lion’s Head 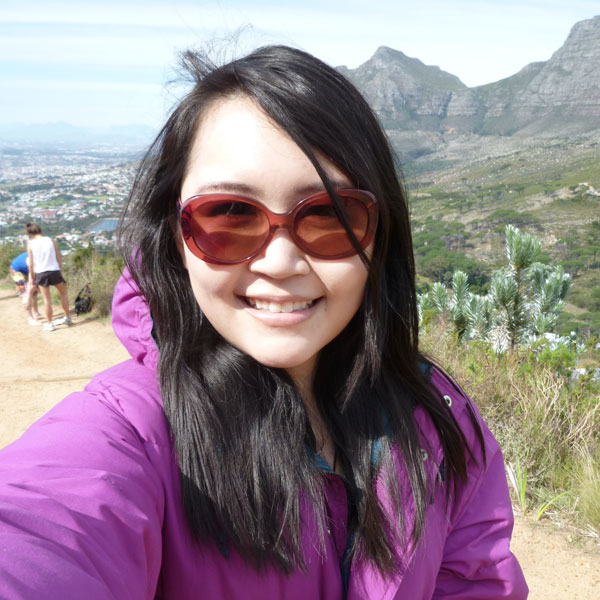 Me at the foot of the mountain 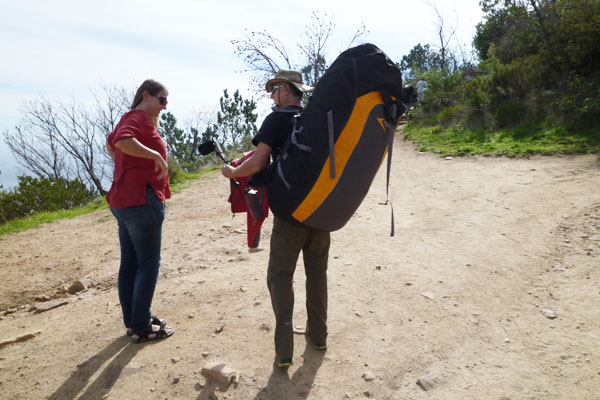 Lizette and Ian, getting ready to trek up Lion’s Head 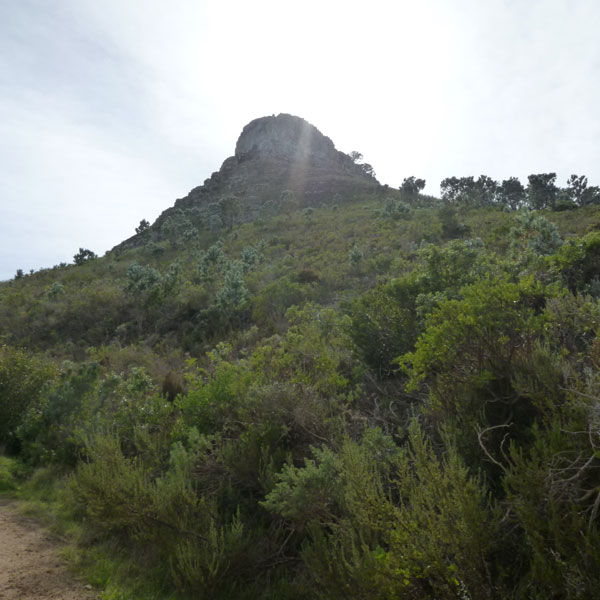 End destination: the mountain top!! It looks near, but it really isn’t!

Get this: Mid-way through the trek, I was already huffing and panting, and I was only carrying a camera. I have NO idea how Ian managed the trek with his some-20-odd-kilo backpack filled with tandem paragliding equipment — and he was scaling up the mountain faster than any of us!! I guess he’s used to it since he does this all the time? And maybe that’s why he’s so skinny too?? o_O 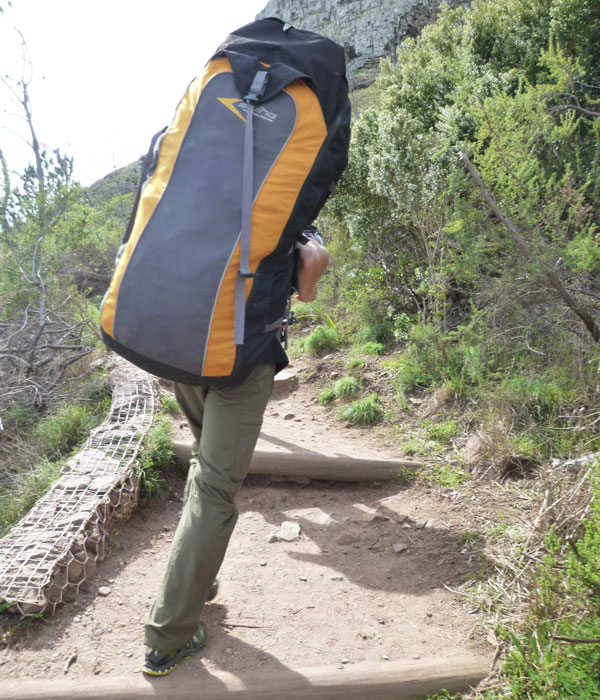 Ian scaling the mountain not unlike Sun Wukong

While trekking, I could see paragliders launching off from the mountain top. That really got me excited (and nervous at the same time), as it hit me that I was going to be flying in a few minutes!!! 😀 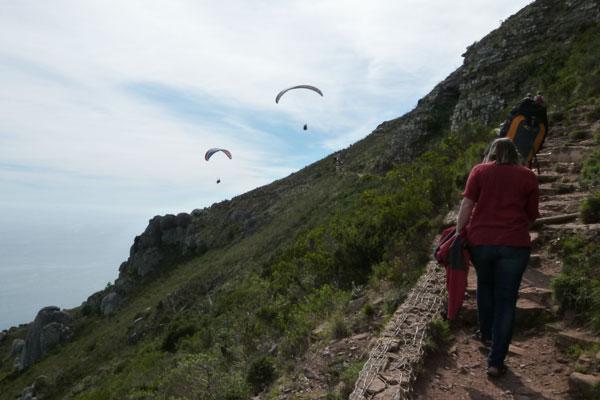 Preparing for the Flight…

And after about 15 minutes, we finally reached the launch spot!!! 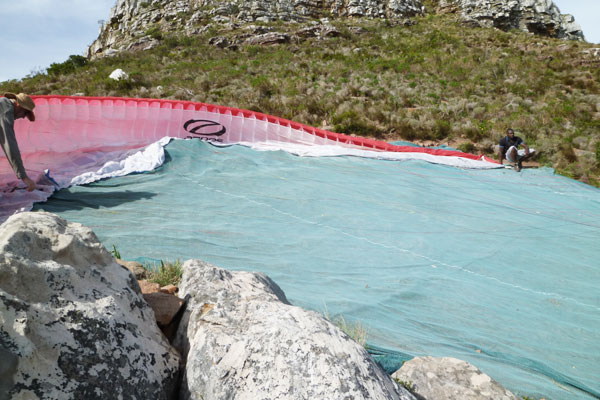 Ian and team setting up the paragliding launch pad. You’re supposed to run from the top of the mat, DOWN the mountain, and “catch” the wind with your canopy, and then take off if everything goes well. It’s possible to trip, fall, and get seriously injured in the process. It’s also possible that you don’t take off at all and get caught in the bushes while running, which will leave you injured as well. (And no, I’m not kidding.)

Since paragliding is an extreme sport filled with many risks (you can get injured or die in case it’s not obvious), I had to sign an indemnity form before proceeding. It’s standard protocol and it’s to indemnify Ian of any issues that arise from the flight. 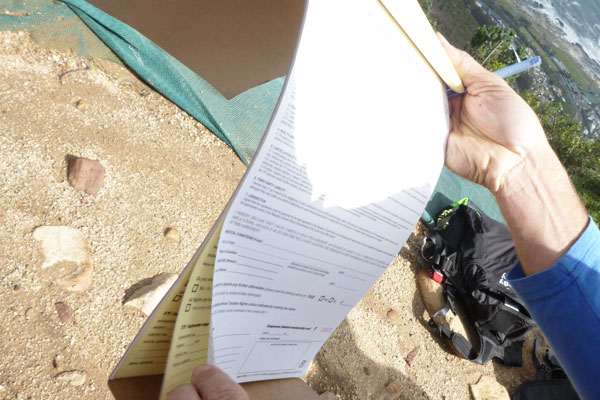 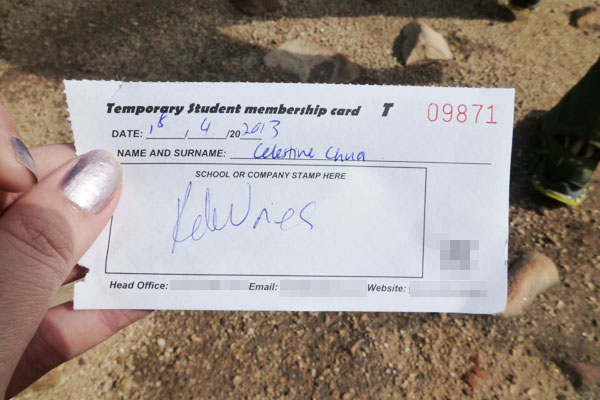 As Ian joked, “Here’s your flight boarding pass!” 😉 And I jokingly responded I got a one-way ticket! (You can only paraglide from top down, not bottom up!) 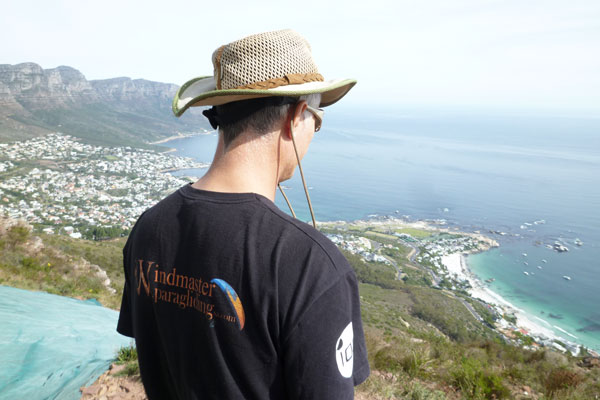 Ian meditating and praying before the flight. …Actually I’m just joking, I think he was just assessing the wind condition to see if it was good for flying. 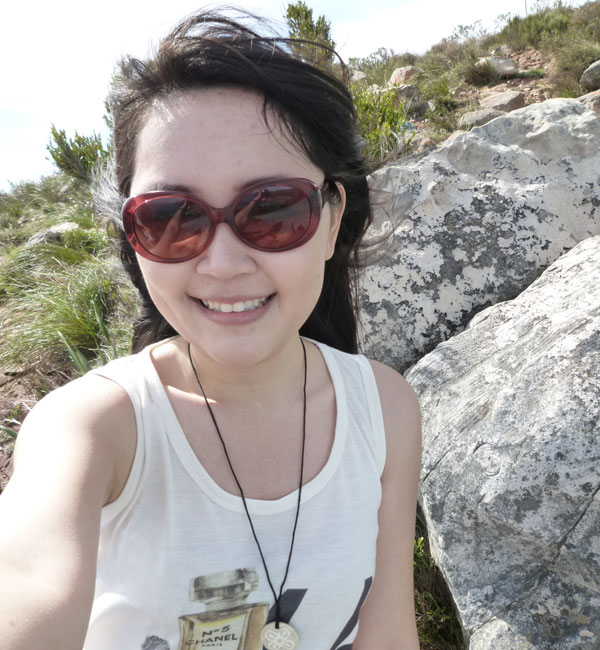 Me, before gearing up. The wind is STRONG up here!! 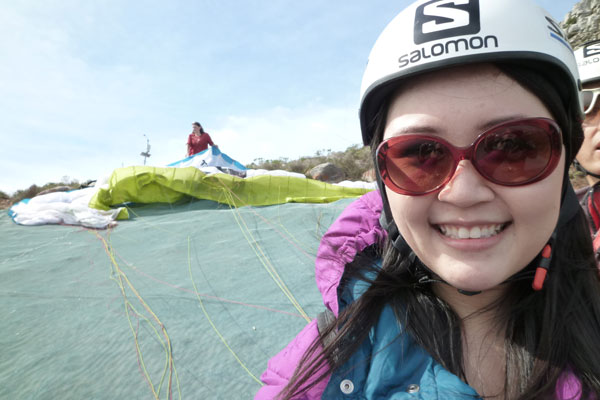 All geared up and ready to fly!!! That’s Lizette preparing the launch mat up there!! (Thanks Lizette! 😀 ) 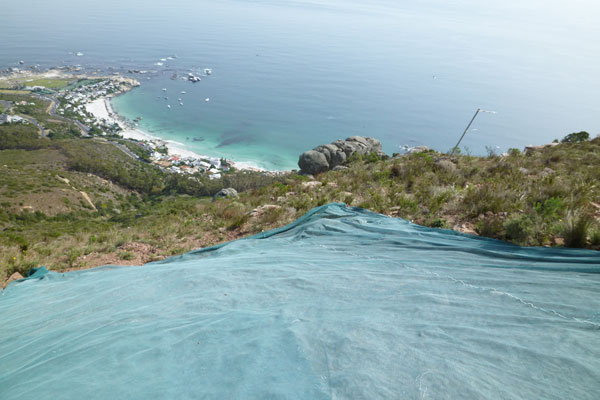 View from the launch pad, before taking off

Now as for the flight itself, it’s best to show it to you in video-form. I’ve uploaded a video to YouTube comprising of my takeoff, flight highlights, as well as the *a-hem* landing. 🙂

Are you ready? Well, buckle your seat belt, and then click “Play” on the video below! Let’s get flying!! 😀

Snapshots from the Flight

Here are some shots from my flight!! 🙂 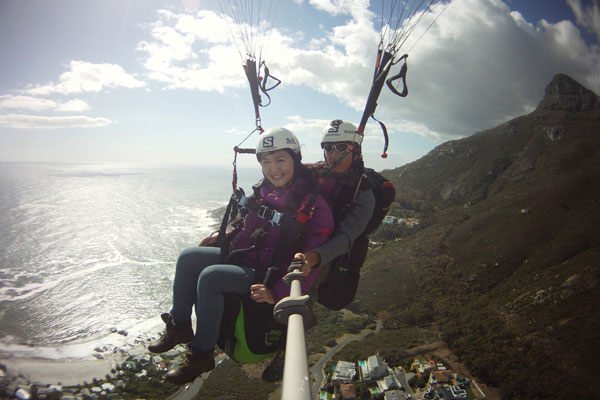 Magnificent view of Cape Town from the sky 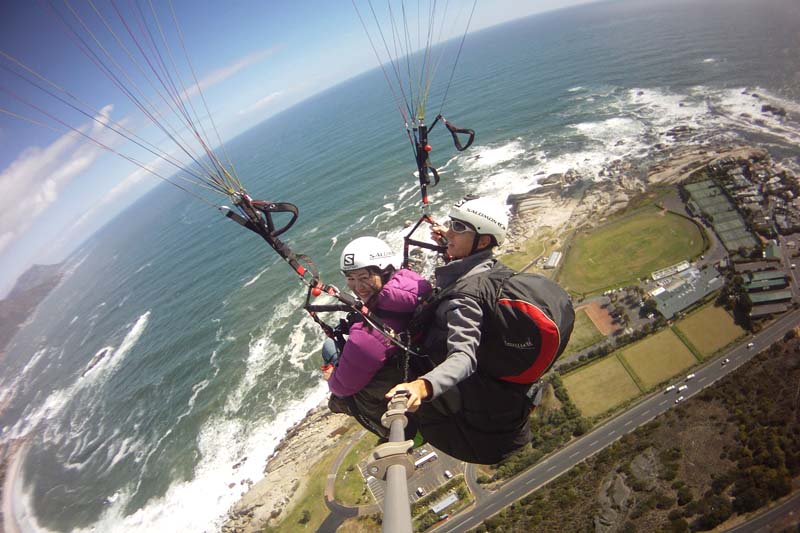 Check out the beautiful blue skies and sea in the background! 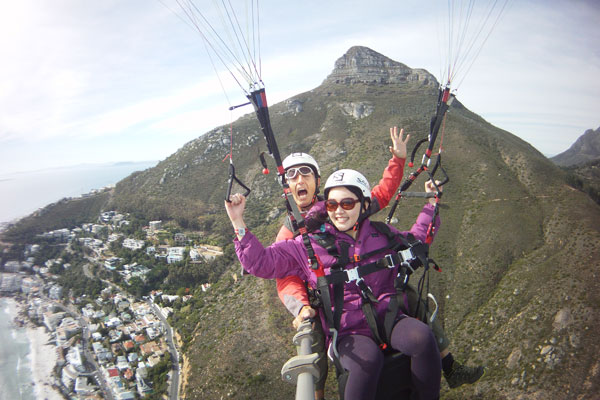 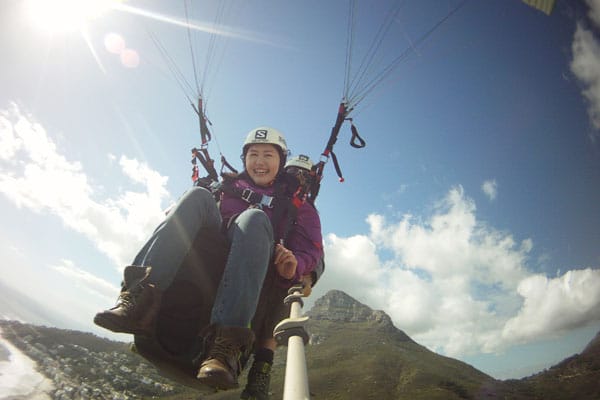 In case you are wondering why I was wearing tights in the previous picture but jeans in this one, that’s because I changed my pants while in the air. 😀 … Just kidding, they are simply photos from two different flights! 😀 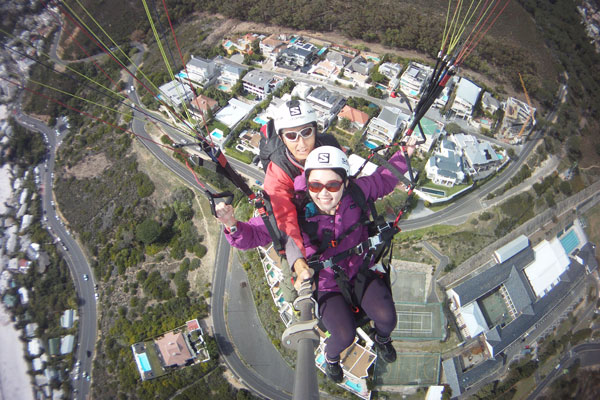 Cape Town beneath our feet!!! 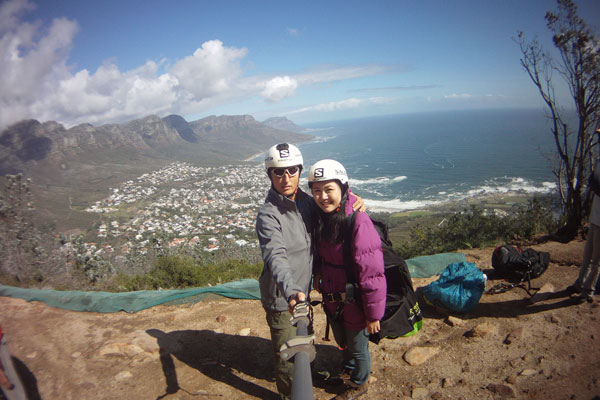 Ian and I, before the flight 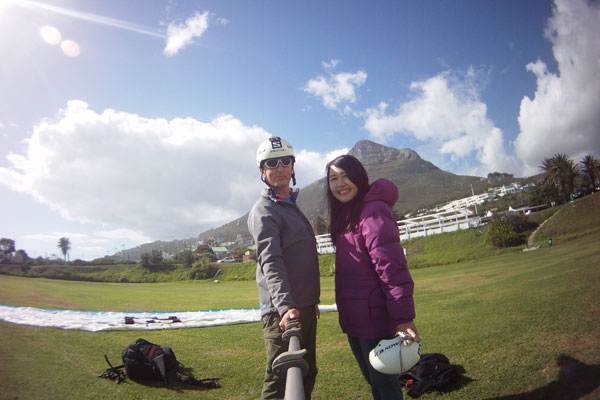 A glorious shot of Ian and I after the flight. That’s Lion’s Head in the background! 🙂

My Thoughts of My Paragliding Experience

If you’ve watched my video above, my reactions and emotions during the flight say it all. 🙂 Throughout the flight, I was feeling pure joy and ecstasy. It was incredible looking down from my seat, seeing myself float above Earth (with Ian behind me), suspended by nothing but a canopy and a harness.

In the meantime, everyone below — cars, people, restaurant waiters, fellow paragliders, etc. — was going about their own routine, without a care in the world, without even knowing that I was up there flying and having the time of my life.

Being up in the air, flying in the glider, made me feel tiny. It made the world feel tiny, given that everything (and everyone) was just beneath my feet. It also made my problems, concerns, and thoughts seem tiny. Up there in the sky, nothing matters. All you experience is purity and serenity.

I can understand why people like Ian and Lizette would fall in love with paragliding, and I’m thankful to tandem-pilots like Ian for showing this aspect of the world to non-paragliders like me. Without them, I would never have gotten to fly at all. So, a huge thank you to Ian and Lizette for making this possible for me!

I personally think that extreme sports like paragliding or skydiving is something that all of you should try at least once in their lifetime. It’ll tingle your worldview and your senses after you do it. After all, when you’ve just spent the last few minutes of your life suspended hundreds of meters above ground and seeing the world pass you by, you can’t help but have some perspective shift in terms of how you see things, even if unconsciously.

Of course, take all safety precautions and only fly with licensed tandem pilots, and not people looking to make quick bucks. There are licensed pilots charging people for tandem flights who are not licensed tandem pilots — and having a pilot license is totally different from a tandem pilot license. Make sure to always verify and ask for tandem-pilot certifications before registering for any extreme-sport activity — not taking proper safety precautions can result in serious injury or even death!

By way of my paragliding flight, I got to tick off an item off my bucket list, which is “to fly” 😀 (and I don’t mean flying by plane).

Do you have your bucket list? If not, maybe it’s time to create yours! 🙂 Read my bucket list article 101 Things To Do Before You Die.

If you’re visiting Cape Town, you HAVE to book a tandem-paragliding session with Ian. He may look stern, but he’s really an awesome guy. His full name is “Ian De Vries” and you can contact him at +27 82 717 8389. Tell him that you are referred by Celes, Lizette’s blogger friend from Singapore, and he’ll give you a good rate! 😀

Living in Ubud, Others: Insects, Language, Internet and More