From Procrastination to Massive Productivity in 1 Month [Craig Scott]

If so, you are not alone. Many PE readers would often share with me their procrastination struggles, including constantly switching from goal to goal and not being able to see projects through fully. For YEARS, this was what Craig experienced too. He found himself regularly switching from one goal to the other, never quite finishing the previous one. For over 15 years (that’s FIFTEEN, 1-5), he sought answers through countless mediums — books, courses, speeches, articles, etc. He even engaged a coach, tried hypnotherapy, and consulted with a world-renowned doctor on procrastination at one point! 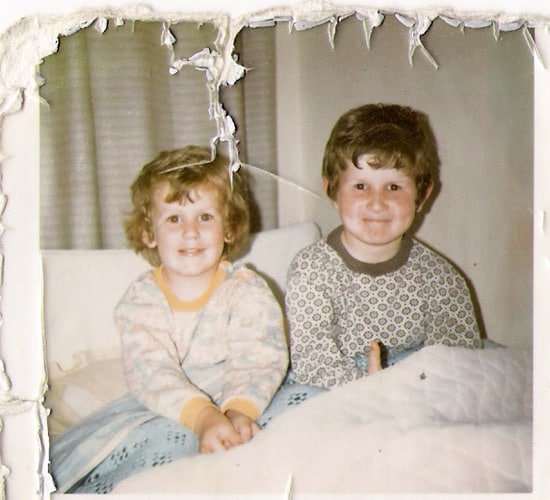 Craig’s childhood photo. That’s Craig on the left and his brother Phil on the right! 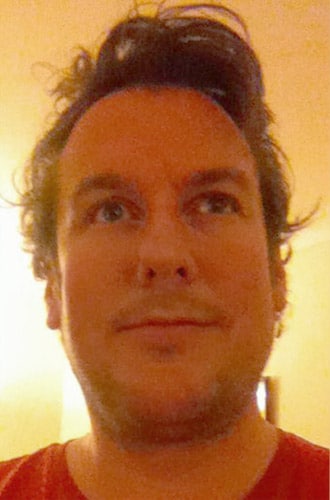 Yet, nothing stuck. Craig would sometimes look at “those people” — the successful super achievers — and wonder, What’s their secret? Why is it that they’re so productive but I’m not? Am I perhaps just a born procrastinator?

Then came the open call for Anti-Procrastination Course. At that point, Craig had exhausted just about every resource on beating procrastination. Having been reading PE for two years, Craig signed up. He felt that while he could keep reading books, articles to improve, the problem was with procrastination was that one could always procrastinate in doing so, given no real deadline — in turn creating a self-looping problem. With a live course and coaching, Craig felt that this could provide him the support he needed.

As it turned out, Anti-Procrastination Course was the game-changer for him. In just 2 months, I witnessed his transformation:

Even though Craig originally joined Anti-Procrastination Course to work on his chartership, he walked away with so much more. To him, the course is more than just about procrastination — it’s a course on successful living where he reconnected with his goals, vision, and himself. It was where he melted his procrastination blocks and learned to take constant, massive, natural action — without forcing himself to do so.

It’s been a year since Craig took the live course and I decided to invite him on PE to share his experience. With that, take it away, Craig! :)

Q) Hi Craig! :) Tell us a bit about yourself. Who are you and what do you do?

Hi everyone! I’m Craig, I’m a single 40-something living 30 miles from central London. I’ve worked in sales-related jobs in Banking and Insurance sectors since leaving school at 17. I returned to study at 27 to get a degree and again at 34 to get my Masters. My plan was to change my career and find something I could be passionate about.

After my Masters, I got a better job but was still in a role that I didn’t enjoy. I was a UK Sales Manager and got to coach and train a lot which was useful experience, but this wasn’t what I wanted to do at all. I wanted to use occupational psychology in my role but my company didn’t allow me to try new things. [Celes: Occupational Psychology is the study of human behavior at work.] After staying on for 5 years (2–3 years too long), I quit last year to become self-employed! Since then, everything has picked up.

Q) How did you know about Personal Excellence?

I would say I’ve been on a bit of a quest for the past 15 years to make sense of what I was doing with life. As I got older, the years just flew by without me noticing!! While work was enjoyable because the money was reasonable, I felt that something was missing. I couldn’t work out what that was, but I wasn’t happy. Eventually, work became a chore where I stopped trying.

So I began soul searching to work out what I really wanted to do. 3 years ago [in 2012], I googled “life purpose,” “life coaching,” “meaning of life,” etc. This was when I found PE.

Q) What made you stick around?

Initially, I just entered my email address to get updates. They were (are) free and interesting and I read regularly (even today). I stuck around because I liked how Celes was often talking about her situations and thoughts. There wasn’t a situation mentioned that I hadn’t been in before, so I could relate to everything she wrote. It made me feel less alone in difficult times.

Perhaps the most important thing was that I believed Celes was genuine. Not a corporate sales site with a made-up figurehead — and I can spot the corporate sites quite easily. I don’t trust websites easily but PE is clearly the real deal with Celes sharing many personal experiences and displaying a real care and desire to help people.

Q) Prior to Anti-Procrastination Course, you read books, tried hypnotherapy, attended seminars (by other companies), and even engaged a coach to overcome procrastination. Can you tell us more about that?

I started with self-help books, which I still have, and still haven’t finished! The problem with procrastination is that you can go through phases where you get a lot done, after which the book gets shelved. Before you know it, the procrastination starts again. Some of these books made a lot of sense; some were just not helpful. Either way, I have never finished any of them.

I joined a psychology society which offered seminars by highly-qualified speakers, doctors, professors, and therapists. I — without fail — would leave each seminar feeling more confused than before. I still remember one of them was a world-renowned professor in the field of treating procrastination and has written many books, and he was the worst of all!

Then I tried a hypnotherapy course with a lady who had an incredible impact on me. Unfortunately, the positive impact was short-lived. I would have gone back to her, but she wasn’t cheap and I had just been made redundant then.

I also tried seeing a psychologist/therapist who was also expensive but I felt like I was just walking down the same well-worn path. So I didn’t expect a different outcome and decided to stop throwing good money and time away.

I’m not sad that I tried all those methods, but it was frustrating and expensive. I did these over the course of 15–20 years, so clearly nothing ever stuck for long. In fact, none of it stuck at all! Whilst I don’t regret my search to beat procrastination then, I won’t ever get the time back.

Q) You then joined Anti-Procrastination Course last year (2014). This is actually the first PE product/course you purchased. What made you sign up?

Yes, it was the first PE product/course I bought. It was at a time when I decided not to bother with seminars or therapy anymore.

I felt that I wasn’t living a full life despite having plenty of ideas of what I wanted to do but never finishing anything properly before moving to the next thing. I felt demoralized and googled for an online course to beat procrastination. PE came up and obviously I felt like I knew PE by now after getting the emails for a few years. But I still investigated and compared it to other online procrastination courses as, I wouldn’t say I was desperate, but I didn’t want to waste money if possible! After that, I signed up.

I had faith that you were (are) a genuine person by this point. [Ironically] despite reading PE for so long, I didn’t know that you offered a procrastination course until I did the Google search!

Other reasons I signed up were (1) the course offered group sessions so I knew I would meet others in the same situation, (2) it involved psychology which is clearly key with procrastination, and (3) it was effectively coaching meetings rather than just more books.

Q) Please share with us your breakthroughs from the course! What did you learn, gain? 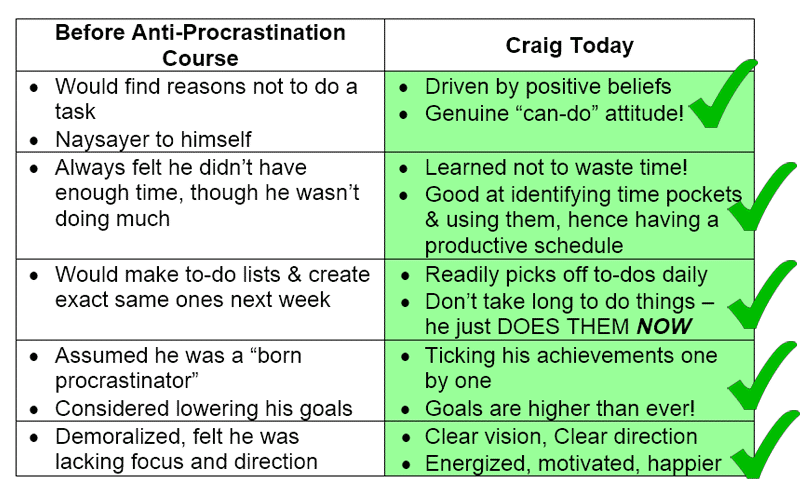 Q) It’s been 10 months since the course ended. What have you accomplished since?

That, to summarize, is an amazing difference that I can only attribute to the Anti-Procrastination Course and to you Celes.

Q) What would you say were the best things about the AP course for you?

Celes is the best thing! Because she GENUINELY cares for her students. For many weeks of the course, Celes stayed online long after the allotted time, to make sure everyone understood everything and to keep discussing or answering questions. She is exceptionally professional in ensuring her students achieve maximum benefit and goes way beyond expectations to ensure it happens. It’s clear that my success is of paramount importance to her.

In fact, Celes has remained interested in my progress after the course and checks in from time to time. I’ve never done another course where the person actually cares once your money is paid and the course is over!

For the course, even though it’s called “Anti-Procrastination,” it actually covers much more than just procrastination with many excellent ideas and processes for living a successful life. Yes it beats procrastination, no doubt at all. But the life skills for successful living will stay with me for life. It is a whole collection of strategies, concepts, assignments, support, etc. that came together to encourage action. It was easy in the end, but I would never have got there with books.

Q) Some readers may be reading this interview and are not too sure if Anti-Procrastination Course is right for them. Do you have any advice for them?

My advice is to not waste any more time. Life goes by faster as you get older. I was always jealous when reading about these super human people who got so much done, and then I’m now one of them!! Honestly, you can become like that too with this course; the benefits go a long way further than simply beating procrastination. This course is worth thousands of dollars and it has changed my life.

Before the course, I was ready to give up and accept that maybe I was just a “born procrastinator.” I even considered lowering my goals and ambitions, which I now understand was just a self-protection strategy so that I wouldn’t feel bad at myself for not starting or not finishing anything! Now my goals are higher than ever and continue to grow as I tick off more achievements. For the past year, I finally feel like I’m living my life the way it should have always been lived.

On a personal level, I just want to say a really heart-felt thank you to you Celes, for the difference your course and leadership has made to me. I will never forget the positive results gained and your warm but professional teaching methods. The desire was in me for my growth journey already, but I was stumbling around in the dark almost, clutching onto books, therapists, experts etc. in hopes that they had the answer. [They didn’t.] This course and your leadership has made ALL the difference to my life. I can’t thank you enough.

Craig’s results has been transformational. I credit his success entirely to himself:

Update, Sep 10, 23:59pm: Thank you to everyone who registered – registration is now closed and we have a full class for the upcoming course! To those of you who’ve registered, look forward to working with you in the months ahead! :D Thank you!

Next up, another Anti-Procrastination alumni who went from procrastinating on her book project for 20 years to publishing her first book soon. Here is Diana’s inspiring story: From 20 Years of Putting Off Her Book, to Upcoming Author

How To Spend Less Time on Emails

How To Stop Procrastination: Complete Guide

50 Ways To Boost Your Productivity